The 20th Annual Tugboat Roundup begins on Friday, September 6th, with a Tugboat Parade mustering at the USS Slater around 3 pm, and cruising north by Corning Preserve, Watervliet, Troy, Lansingburgh and into Waterford to begin the weekend festivities.

Music will be playing next to the Hurst Harbor Center all weekend long. Kids activities include an fire safety obstacle course, pony rides, a bouncy slide, face painting and more. END_OF_DOCUMENT_TOKEN_TO_BE_REPLACED

The Waterford Historical Museum, located at 2 Museum Lane, has announced their summer schedule of events, including a Chocolate Tasting and Open House, the Annual Tugboat Roundup, the Annual Sal Open and Clam Bake, and more. END_OF_DOCUMENT_TOKEN_TO_BE_REPLACED 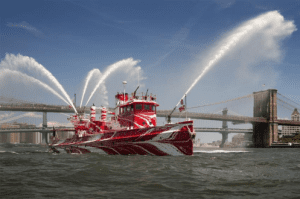 The annual Waterford Tugboat Roundup is set for this weekend, September 7-9, with an estimated 30 boats expected to attend. The boats range from historic to modern tugs, workboats, fireboats, crew boats, tenders and more.

A main attraction of the Roundup will be the new paint job of the Harvey. This historic fireboat became itself a palette for Tauba Auerbach, an artist commissioned by the Public Art Fund and 14-18 Now Exhibition. The rendering of the Harvey shows contradictory directions of whites and reds, emulating the ‘dazzle designs’ applied to ships during World War I to confuse U- boats in firing torpedoes. END_OF_DOCUMENT_TOKEN_TO_BE_REPLACED

The historic John J Harvey has been named as 2018’s Tug Of The Year for the 19th annual Tugboat Roundup.

The Roundup is an annual gathering of historic and working tugboats and other work vessels in Waterford in the fall. Each year they honor a boat with a particular history on New York State’s waterways. END_OF_DOCUMENT_TOKEN_TO_BE_REPLACED 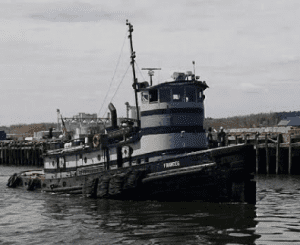 A Troy towing company has had one of its flagship tugs named Tugboat of the Year by the Waterford Tugboat Roundup.

The honor is awarded by the Roundup’s planning committee each year, celebrating a boat’s contribution to history and, often, to the ongoing success of inland waterway transportation. END_OF_DOCUMENT_TOKEN_TO_BE_REPLACED 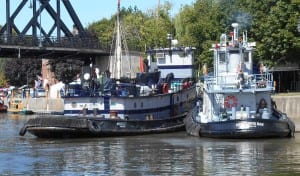 Music, boat rides, walk-through’s of working tugboats, food vendors, arts, crafts, kid’s activities, and fireworks are just some of what visitors can expect at the 16th annual Tugboat Roundup in Waterford the weekend after Labor Day, September 11, 12 and 13th. END_OF_DOCUMENT_TOKEN_TO_BE_REPLACED 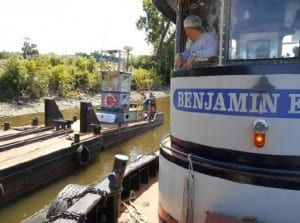 It’s been called one of the largest maritime festivals in New York State. For three days, September 5th through the 7th, the Waterford waterfront (just north of Albany) will host the 15th Annual Tugboat Roundup.

A gathering and show place of both working and historic tugs of the Hudson River and New York State Canal system, the Roundup has evolved into a festival of boating at the Gateway to the Canal System. More than 35 boats are expected to be along the wall in Waterford this year, according to Tom Beardsley, Marine Event Coordinator. END_OF_DOCUMENT_TOKEN_TO_BE_REPLACED 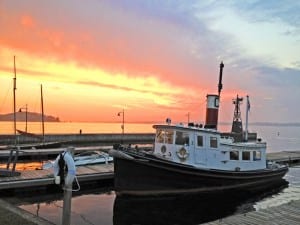 The C.L. Churchill, a 50 year old wooden tugboat, has been named Tug of the Year for the 2014 Waterford Tugboat Roundup.  The Roundup is an annual three-day event in Waterford, NY highlighting the area’s heritage of waterborne commerce.

The C.L. Churchill is the accompanying tug to the Lois McClure, a replica canal schooner of the type which operated on some of the canals of New York State and Lake Champlain in the 19th century. The Roundup bestows the honorary Tug of the Year title to a different tug each year, typically one that brings its own unique history to the event. END_OF_DOCUMENT_TOKEN_TO_BE_REPLACED 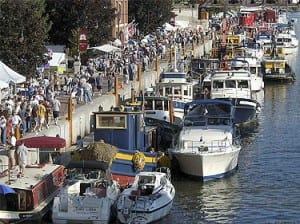 This weekend, nearly three dozen boats are expected along the Waterford wall, in front of the Visitor’s Center, for three days as the town relives its canal heyday for its annual tugboat round-up. Now in its 14th year, the Waterford tugboat Roundup and has become one of the four premier waterfront festivals in New York State and the largest maritime festival north of New York City.

Family-friendly music plays from Friday afternoon through Sunday afternoon, tugs will be open for tours, kid’s games and activities, tour boat rides, line-tossing, tours of the tugs and more. Shuttle busses will run from remote parking. There is no charge for the event (other than a nominal charge for the tour boats). END_OF_DOCUMENT_TOKEN_TO_BE_REPLACED

More than two dozen boats are expected to participate in this year’s Tugboat Roundup in Waterford. The Roundup, cancelled last year due to damage caused by the storms Irene and Lee, is organized by the town of Waterford and runs from Friday, September 7 through Sunday, September 9.

Working tug boats from along the Hudson River including Kingston, Albany and Troy, from the Canal System, the Great Lakes and the St. Lawrence River are expected to converge in Waterford in time for Friday afternoon’s parade. The parade starts at the Port of Albany at 2:45 on Friday with boats arriving in Waterford as early as 5pm.

Live music will be performed throughout the event with at least nine different groups booked to play on board one of the tugs, the Grand Erie, docked in front of the Visitor’s Center along the canal at the foot of Tugboat Alley in the village.

Boat tours will be offered on both the Hudson River and the Waterford locks and kids activities will include face-painting, clown performances, puppet theaters, a bouncy-bounce, pony rides. and more throughout the weekend.

On Sunday, the American Society of Civil Engineers (ASCE) will be dedicating the Waterford flight of locks as a significant engineering achievement in America. This dedication will take place on Sunday.