The Tenth United States Cavalry Regiment, one of four regular army black regiments collectively known as the Buffalo Soldiers, arrived in Burlington, Vermont in June of 1909 to begin a four-year tour of duty at Fort Ethan Allen.

Their arrival alarmed the almost exclusively white population. Many people feared the presence of sizable numbers of African American soldiers in their community and a bitter debate ensued over whether the city should adopt Jim Crow facilities. END_OF_DOCUMENT_TOKEN_TO_BE_REPLACED 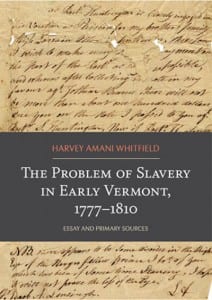 The Problem of Slavery in Early Vermont, 1777-1810 will be enlightening to Vermont teachers and students, scholars of the early national and antebellum periods of U.S. history, and anyone interested in the history of Vermont.  The book can be purchased at the website of the Vermont Historical Society. END_OF_DOCUMENT_TOKEN_TO_BE_REPLACED

In her remarks at the event celebrating the launch, VHS President Sarah Dopp noted that March 4th, in addition to being the 220th anniversary of Vermont’s becoming the 14th U.S. state, was also a “punny” call to action for VHS to “march forth,” in the final leg of our $900,000 capital campaign. END_OF_DOCUMENT_TOKEN_TO_BE_REPLACED

April 2011 will mark the 150th Anniversary of the firing on Fort Sumter and the start of the American Civil War and the Vermont Historical Society has laid out some preliminary plans for the multi-year observance include several large statewide events, as well as coordination of community-based activities. The planning team has drafted annual themes for each year of the commemoration that they hope will resonate with contemporary issues. END_OF_DOCUMENT_TOKEN_TO_BE_REPLACED

April 12, 2011 will mark the 150th Anniversary of the start of the Civil War, and the Vermont Historical Society (VHS) has already begun leading the statewide planning effort for the Vermont Civil War Sesquicentennial Commemoration. With educational institutions, state agencies and other nonprofit organizations, VHS will be developing plans for programs that will explore and celebrate the role of the Green Mountain State in this bloody conflict. END_OF_DOCUMENT_TOKEN_TO_BE_REPLACED

The Vermont Historical Society is asking for participation in a survey to help them determine which aspects of the organization are most important. The survey allows plenty of opportunity to comment and they would appreciate hearing from you folks interested in Vermont history by June 23rd if possible. You can find the survey here.