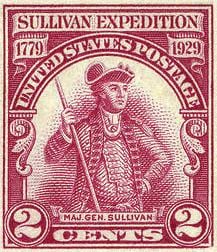 On October 11 at 6:00 pm at the Unadilla Historical Association Robert Spiegelman will present the lecture “The Sullivan-Clinton Campaign, Then and Now”.

During America’s Revolution, George Washington ordered Generals Sullivan and Clinton to launch the biggest operation to date against sovereign peoples in North American history. Most Iroquois are uprooted from their homelands, making way for the Erie Canal and Westward Expansion. Strikingly, though Sullivan/Clinton has the most historical markers in New York, it has been nearly forgotten. Spiegelman’s lecture combines fresh research, visuals, and animated maps to attempt to answer why. END_OF_DOCUMENT_TOKEN_TO_BE_REPLACED