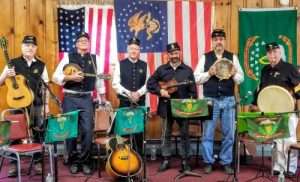 The Irish Brigade, consisting of mostly Irish Americans, served in the Union Army in the American Civil War. This infantry brigade became known as the “Fighting 69th” and continued in later wars.

The Irish Brigade was known in part for its famous war cry, the “Faugh a Ballaugh,” meaning “clear the way.” Since 1907, the Fighting 69th has been a unit of the New York National Guard. END_OF_DOCUMENT_TOKEN_TO_BE_REPLACED