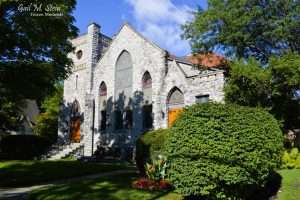 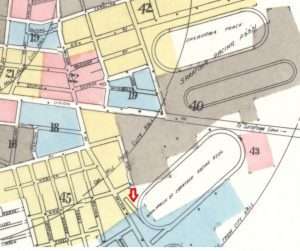 The Wilson Chute is named in honor of Richard T. Wilson, Jr. who had been the President of the Saratoga Racing Association beginning in 1909. As an executive and an investor, he was integral in saving racing at the Spa and then developing the sport and the racing plant that so many are familiar with today. END_OF_DOCUMENT_TOKEN_TO_BE_REPLACED 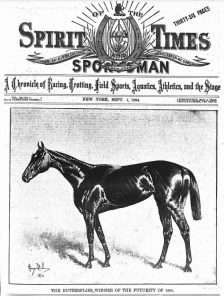 Among the most notable of the sporting press arrived in 1831, when William T. Porter and James Haw published the first issue of The Spirit of the Times, focusing on horse literature and sporting subjects. They had chosen the name for their broadsheet from a quotation in Shakespeare’s King John, “The spirit of the times shall teach me speed.” END_OF_DOCUMENT_TOKEN_TO_BE_REPLACED 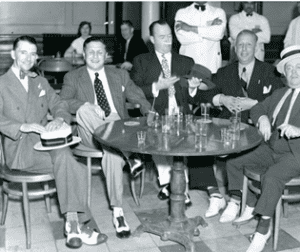 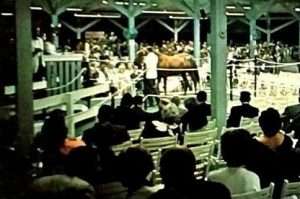 The yearling sales at Saratoga Race Course have long set the standard for the thoroughbred industry. Fasig-Tipton entered as a participant in 1917, with their purchase of property on East Avenue, giving them the advantage over existing auction companies like Powers-Hunter and the Kentucky Sales Company, who conducted their auctions in the race track paddock. Interestingly, all the competing companies would often hire the same auctioneer, the venerable George A. Bain, to deliver the chant. END_OF_DOCUMENT_TOKEN_TO_BE_REPLACED

The large covered porch, typical of so many of Saratoga Springs’ Queen Anne style homes, allows an elevated view of “Tex” Hughlette Wheeler’s fabulous sculpture. Charles S. Howard, Seabiscuit’s owner, commissioned cowboy sculptor Wheeler (who’s unique given name of Hughlette was the surname of the doctor who delivered him during his mother’s difficult pregnancy), to “capture the horse from life,” and had two castings made. Howard’s heirs graciously donated this casting, originally at the Howard’s Ridgewood Farm, to the National Museum of Racing. The other bronze which Howard had cast has always stood in the Santa Anita paddock. END_OF_DOCUMENT_TOKEN_TO_BE_REPLACED 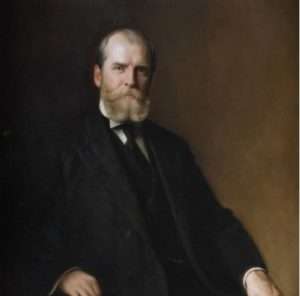 Ellison was famous for his large wagers, and turf writers seemed to revel in detailing his betting successes His countenance was fair, and as he was towheaded, these very recognizable locks earned him a unique sobriquet, the “Blonde Plunger.” The plunger in his nickname implied a reckless speculator or gambler. END_OF_DOCUMENT_TOKEN_TO_BE_REPLACED 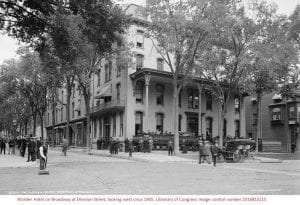 After the Marvin House at the northwest corner of Division Street and Broadway in Saratoga Springs was destroyed by fire in 1865, it was quickly rebuilt as the city’s largest hotel. In the early 1880s it was renamed The Arlington Hotel briefly before being purchased by William W. Worden in 1885. He renamed it The Worden Hotel at the request of guests who honored him with a dinner celebrating his purchase. END_OF_DOCUMENT_TOKEN_TO_BE_REPLACED 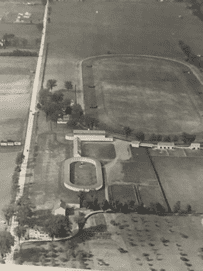 Born in 1826, Stephen Sanford worked with his father John and then on his own to create the Sanford carpet mills in Amsterdam. He went to West Point, served in Congress and was a friend of Ulysses S. Grant.

As a result of bigoted attacks by his political enemies being carried forward by later writers like Herbert Asbury in Gangs of New York (1928), he’s been falsely accused of being in criminal league with Tammany Hall, for leading “the dead rabbits gang,” and for being involved in the killing of the nativist William “Bill the Butcher” Poole. END_OF_DOCUMENT_TOKEN_TO_BE_REPLACED