Prior to the nineteenth century, ice harvesting was a local and small time operation. Ponds were the best source, because still water freezes first, but all sources of water were employed. January or February was considered the best month for harvesting. Often communities or groups of farm families would work cooperatively, dividing the “crop” proportionally. In addition to hard work, the “icing” was a social occasion and opportunity for locals to pass gossip and news. END_OF_DOCUMENT_TOKEN_TO_BE_REPLACED

It has been over 90 years since the Conklingville Dam was completed and the river that flowed through the Sacandaga Valley became the Great Sacandaga Reservoir.

When visitors hear of this river that once ran through the area, they likely visualize it as a small meandering creek passing quietly past the picture-perfect farms and tiny settlements that dotted its shore. END_OF_DOCUMENT_TOKEN_TO_BE_REPLACED 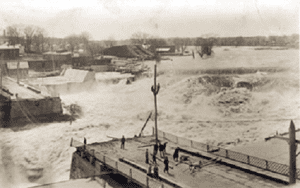 Before the 20th century, the upper Hudson River was used commercially as a conduit to ship logs downstream to the mills along the river. Logs were stored in pens, behind temporary dams, and at streamside log landings until the spring melt increased the flow of the river – known as the spring freshet. When the flow rate was right, the the logs were sent careening downstream to the mills. END_OF_DOCUMENT_TOKEN_TO_BE_REPLACED 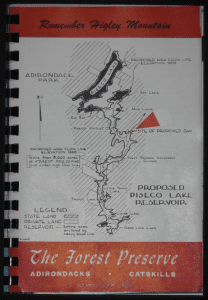 The Sacandaga River valley has been used as a transportation and communication corridor since before Europeans arrived. It was a native trail, a military road, and a proposed canal and railroad route. Today it’s home to Route 30.

The river is a provider of power and recreation, and a powerful force of nature. END_OF_DOCUMENT_TOKEN_TO_BE_REPLACED

In this episode of The Historians Podcast, David Brooks of Schoharie Crossing State Historic Site in Fort Hunter has Erie Canal lore to share. He also tells of unrealized plans to make a canal out of the Sacandaga River. END_OF_DOCUMENT_TOKEN_TO_BE_REPLACED 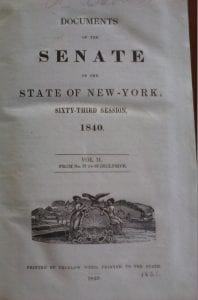 With the opening of the entire Erie Canal in 1825, a call for more canals and other internal improvements arose from all over New York State. People in many legislative districts thought that if the state could build a canal that had already shown its great value, it could also provide infrastructure projects to help regional economies to connect with the artificial river that joined the interior Great Lakes and the global market through Albany and New York City. This was also the case coming from the legislative representatives from Montgomery County and although many lateral canals would be subsequently surveyed, planned and some would even be built, perhaps the most intriguing was one that never had a shovel turned.

As early as 1826, citizens from Montgomery County were calling for a plan to connect the Erie Canal – which already ran through the county on the south side of the Mohawk River – to the industrializing area around the county seat of Johnstown and further into the wilderness to the north for raw materials. Inhabitants of Montgomery and Hamilton Counties formally called upon the New York State Senate through the Canal Commission for a survey to be conducted and a planned canal from Caughnawaga (present day Fonda) up the Sacandaga River Valley (Journal of the NYS Senate 49 Sess 1826). The original intention was to have a canal of over 30 miles and elevation increase of 350 feet that would connect the Erie Canal to the waters of what is now known as the lower Adirondacks. That could therefore be connected to the head waters of the Hudson River and also through a series of lakes to the Raquette River and the St. Lawrence River. Senators knew that in order to populate that region of the state and exploit its natural resources, some forms of improvements would be necessary. However, their concerns grew over the expense and circuitous route the canal would need to travel. The senate forwarded the recommendation to the committee on canals were it apparently lay dormant. END_OF_DOCUMENT_TOKEN_TO_BE_REPLACED