The British and their Indigenous allies repeatedly attacked the communities in the Schoharie Valley to the west however, despite the presence of a large militia and three forts to protect the people of Schoharie. END_OF_DOCUMENT_TOKEN_TO_BE_REPLACED 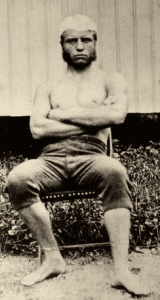 New York has had several history-minded governors, including Andrew Cuomo, who often cited the Erie Canal and other historical achievements as evidence of our state’s historical greatness and resilience. Levi P. Morton signed the law that created the office of the State Historian. Alfred E. Smith signed the statute that created the network of official local government historians. Franklin D. Roosevelt served for a while as the official historian of the Town of Hyde Park.

But Theodore Roosevelt, governor from 1899 to 1901 and president, 1901-1909, was a notable historian in his own right. He read extensively in history and his home at Sagamore Hill on Long Island reportedly contained about 12,000 books, many of them on history, at the time of his death in 1919. Roosevelt’s own books The Naval War of 1812 and The Winning of the West were best-sellers in their day. His history of the city of New York is still interesting. END_OF_DOCUMENT_TOKEN_TO_BE_REPLACED