Fenimore Art Museum in Cooperstown has received funding for new programs and a publication based on 35 letters between American Founding Father Alexander Hamilton and Aaron Burr – the man who killed him in a duel in 1804.

These documents, although familiar to historians, have remained largely unknown to the public until recently when they were brought to light in the song “Your Obedient Servant” from the hit Broadway musical Hamilton. END_OF_DOCUMENT_TOKEN_TO_BE_REPLACED

In this episode of Ben Franklin’s World: A Podcast About Early American History, Barbara Clark Smith, a curator in the division of political history at the Smithsonian’s National Museum of American History and the author of The Freedoms We Lost: Consent and Resistance in Revolutionary America (The New Press, 2010), leads us on an exploration of how Americans interacted with their government before the American Revolution and how the Revolution changed their interaction and ideas about government. You can listen to the podcast here: www.benfranklinsworld.com/154

END_OF_DOCUMENT_TOKEN_TO_BE_REPLACED

This week on The Historians Podcast, Pulitzer Prize winning author David Garrow discusses his critical and massive book on the formative years of the 44th President of the United States, Rising Star: The Making of Barack Obama (Morrow, 2017). Listen to the podcast here.     END_OF_DOCUMENT_TOKEN_TO_BE_REPLACED

The institution of African slavery in North America began in late August 1619 and persisted until the ratification of the 13th Amendment to the Constitution of the United States in December 1865.

Over those 246 years, many slaves plotted and conspired to start rebellions, but most of the plotted rebellions never took place. Slaveholders and whites discovered them before they could begin. Therefore, North America witnessed only a handful of slave revolts between 1614 and 1865. Nat Turner’s Rebellion in August 1831 stands as the most deadly.

In this episode of Ben Franklin’s World: A Podcast About Early American History, Patrick Breen, an Associate Professor of History at Providence College and author of The Land Shall Be Deluged in Blood: A New History of the Nat Turner Revolt (Oxford University Press, 2016), joins us to investigate the ins and outs of this bloodiest of North American slave revolts. You can listen to the podcast here: www.benfranklinsworld.com/133

END_OF_DOCUMENT_TOKEN_TO_BE_REPLACED

The Community Center has been operating at 208 W. 13th Street since 1983. The entire building is intended to be a safe and welcoming place “where everyone is celebrated for who they are.” Today, the Center is an effervescent hub, and sponsors a broad-range of activities and programs for the lesbian, gay and transgender community, including health and wellness, arts and entertainment, and counseling. END_OF_DOCUMENT_TOKEN_TO_BE_REPLACED

In this episode of the Ben Franklin’s World podcast, we discuss the political and military aspects of the American Revolution with John Ferling, professor emeritus at the University of West Georgia and author of Whirlwind: The American Revolution and the War That Won It (Bloomsbury, 2015).  You can listen to the podcast here: www.benfranklinsworld.com/046

END_OF_DOCUMENT_TOKEN_TO_BE_REPLACED 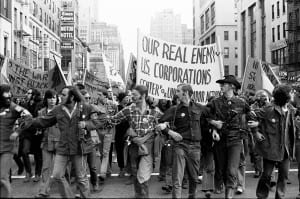 As a scholarly specialist on the American peace movement, I am sometimes telephoned for background information by journalists writing articles about current demonstrations against war or against nuclear weapons. Almost invariably, they have no idea that the American peace movement has a rich history. Or, if they realize that it does have such a history, they have no idea that that history goes back further than the Vietnam War. This is a very big and unfortunate gap in their knowledge. END_OF_DOCUMENT_TOKEN_TO_BE_REPLACED