We publish several podcast announcements each week. You can find them all here.

If you produce a podcast about an aspect of New York State and want to have it noticed here, e-mail editor John Warren at nyalmanack@gmail.com 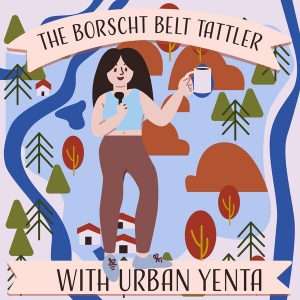 On this week’s episode of The Borscht Belt Tattler podcast, Gary Dan talks about the former Sha-wan-ga Lodge, his family’s Catskills hotel which operated from 1923-1972 in the hamlet of High View, Mamakating, Sullivan County, NY.

Dan talks about how it all started, his memories growing up there, life after the hotel closed, and the tribute webpage he started with his late father Abby Dan which is contributing to the legacy of the Borscht Belt. END_OF_DOCUMENT_TOKEN_TO_BE_REPLACED

This week on The Historians Podcast, the guest is Kevin Hall, author of a memoir on growing up in Ilion in Herkimer County, New York: Ilion, My Childhood, My Memories Growing Up in a Bygone Era (Self Published, 2022). END_OF_DOCUMENT_TOKEN_TO_BE_REPLACED

Sweet researched Sawyer’s decision to charge Henry Bedlow with rape, leading to a raw courtroom drama in the city of New York, riots in the streets, and public debate over class privilege and double standards. END_OF_DOCUMENT_TOKEN_TO_BE_REPLACED

We’ll investigate answers to this question by exploring the histories of occupied Philadelphia and Yorktown, and how civilians, those left on the home front in both of those places, experienced the war and its armies.

These episodes will allow us to see how the war impacted those who remained at home. They will also allow us to better understand the messy confusion and uncertainty Americans experienced in between the big battles and events of the American Revolution. END_OF_DOCUMENT_TOKEN_TO_BE_REPLACED

This week on The Historians Podcast, the guest is Ben Kemp from Grant Cottage in Wilton, Saratoga County, New York, where Civil War general and President Ulysses S. Grant died.

Friends, including Mark Twain, arranged for Grant and his family to live in the cottage for the last weeks of his life. Grant was dying from throat cancer and had lost his family’s money in a fraudulent scheme. END_OF_DOCUMENT_TOKEN_TO_BE_REPLACED

In a town as old as Williamsburg, Virginia, which was established in 1638, it’s often the case that historic buildings with interesting pasts stand unnoticed and in plain sight.

Such was the case for the building that once housed Williamsburg’s Bray School. A school founded by a group of Anglican clergymen with the express purpose of educating Black children in the ways of the Anglican faith. It was an education that included reading, possibly writing, and the Book of Common Prayer. END_OF_DOCUMENT_TOKEN_TO_BE_REPLACED

On the June 2022 episode of Crossroads of Rockland History, we turned our attention to the life and legacy of Millia Davenport (1895-1992).

David Bisaha, Assistant Professor of Theater at SUNY Binghamton joined host Clare Sheridan to discuss this remarkable and trailblazing woman who lived most of her life in Rockland County. Among her many contributions include writing the definitive book of theatrical costume history, The Book of Costume. Published in 1948, it remains the gold standard. In 1991 the Costume Society of America established the Millia Davenport Publication Award recognizing excellence in costume scholarship. END_OF_DOCUMENT_TOKEN_TO_BE_REPLACED

On this episode of A New York Minute in History, Devin Lander and Lauren Roberts discuss how the poor conditions of female textile workers in Capital Region cities led to the creation of a retreat on Lake George where women could “escape” the cities. END_OF_DOCUMENT_TOKEN_TO_BE_REPLACED