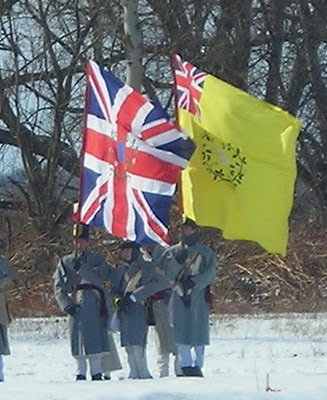 During the War of 1812 the dogs of war barked and bit along the U.S. northern frontier from Lake Ontario to Lake Champlain as American forces tangled with their British and Canadian counterparts for two-and-a-half years. The War of 1812 in this region, and its wider implications, will be topics at the third annual War of 1812 Symposium April 29-30 in Ogdensburg, NY, sponsored by the Fort La Présentation Association.

The five presentations by authoritative Canadians and Americans are: Ogdensburg and Prescott during the War of 1812, Paul Fortier; American supply efforts on Lake Ontario: “Cooper’s Ark,” Richard Palmer; “Colonel Louis” and the Native American role in the War of 1812, Darren Bonaparte; The war on the St. Lawrence River, Victor Suthren; and Excavation of American Graves at the 1812 Burlington Cantonment, Kate Kenny. The post-dinner address by Patrick Wilder is the Battle of Sackets Harbor

“We established the symposium in advance of the war’s 2012 bicentennial to help develop a broader public understanding of the War of 1812, so important to the evolution of the United States and Canada,” said Barbara O’Keefe, President of the Fort La Présentation Association. “The annual symposium is a vibrant forum of scholars from both sides of the boarder presenting informative seminars to an enthusiastic audience of academics, history buffs and re-enactors.”

The cost of the symposium is $100 for the Saturday seminars and after-dinner speaker, including a light continental breakfast, a buffet lunch and a sit-down dinner. The Friday evening meet-and-greet with period entertainment by Celtic harpist Sue Croft and hors d’oeuvres is $10.

The symposium and dinner fee for Fort La Présentation Association members is $90, and they will pay $10 for the meet-and-greet.

Other pricing options are available: $80 for the Saturday seminars without dinner; and $35 for the dinner with speaker.

The Freight House Restaurant in Ogdensburg will host the symposium, as it has in previous years.

The Fort La Présentation Association is a not-for-profit corporation based in Ogdensburg, New York. Its mission is to sponsor or benefit the historically accurate reconstruction of Fort de la Présentation (1749) in close proximity to the original site on Lighthouse Point.

Darren Bonaparte from the Mohawk community of Ahkwesáhsne on the St. Lawrence River is an historical journalist. He created the Wampum Chronicles website in 1999 to promote his research into the history and culture of the Rotinonhsión:ni—the People of the Longhouse. Mr. Bonaparte has been published by Indian Country Today, Native Americas, Aboriginal Voices and Winds of Change, and he has served as an historical consultant for the PBS miniseries The War That Made America; Champlain: The Lake Between; and The Forgotten War: The Struggle for North America.

Paul Fortier, of Kingston, ON, worked 10 years as a military curator and historian for Parks Canada and a following 10 years as a manager at the National Archives of Canada. While living in Prescott, ON, the home he restored was the Stockade Barracks, British military headquarters on the St. Lawrence River during the War of 1812. Mr. Fortier is a founder of the re-enacted Regiment of Canadian Fencible Infantry. He owns Jessup Food & Heritage, providing period food services at Upper Canada Village, Fort Henry and Fort York.

Kate Kenney is the Program Historian at the University of Vermont Consulting Archeology Program. She supervises historic artifact analysis and also helps supervise field work, particularly at historic sites. She is the senior author of Archaeological Investigations at the Old Burial Ground, St. Johnsbury, Vermont. Ms. Kenny has organized and conducted UVM CAP public outreach, including presentations to elementary and high school students. Personal research projects involve Vermont history from the earliest settlement through to the Civil War.

Richard F. Palmer of Syracuse is a senior editor of “Inland Seas,” the quarterly of the Great Lakes Historical Society, and has written some 40 articles for the publication, covering more than 250 years of Lake Ontario’s maritime history. His presentation on “Cooper’s Ark,” is the story of a short-lived floating fortress built in Oswego during the War of 1812, but lost in a storm while sailing to Sackets Harbor. He’ll also recount the attempt to raft lumber for the construction of ships from Oak Orchard to Sackets Harbor; the delivery was intercepted by the British.

Victor Suthren, from Merrickville, Ontario, is an author and historian. He served as Director General of the Canadian War Museum from 1986 to 1998, and is an Honorary Captain in the Canadian Navy and advisor to the Directorate of Naval History and Heritage, Department of National Defence (Canada). He has worked as an advisor to film and television productions and has voyaged extensively as a seaman in traditional “tall ships.” Mr. Suthren has published several works of historical non-fiction, as well as two series of historical sea fiction.

Patrick Wilder is an historian retired from the New York State Office of Parks, Recreation and Historic Preservation. He is the author of The Battle of Sackett’s Harbour, 1813. 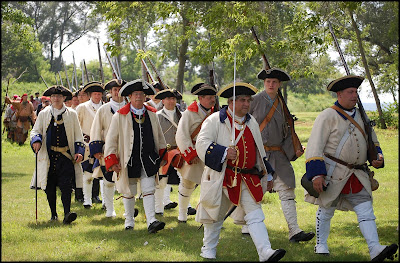 Senator Kirsten Gillibrand’s office has helped move the Fort Association’s application forward, and her office reports the Fort historic site on Lighthouse Point should be on the Federal Register soon.

“Fort de la Présentation, one of the historic jewels in New York State, once played a vital role in the formation of our nation. Once fully restored, the Fort has the potential to attract thousands of tourists, which will help stimulate the region’s economy through new development and job creation,” said Senator Kirsten Gillibrand. “As New York’s first Senator from Upstate in nearly 40 years, I am proud to support the restoration of this beautiful, historic site. Thanks to the work of the Fort La Présentation Association, New Yorkers will soon be able to enjoy this landmark restored to its former glory.”

“The Fort Association is grateful to Senator Gillibrand for her staunch backing of the Fort Project and the assistance of her office to have the Fort’s location listed on the National Register of Historic Places, along with Ogdensburg’s registered heritage sites,” said Barbara O’Keefe, President of the Fort La Présentation Association. “Becoming an acknowledged member of this distinguished group will positively impact our work toward building our Interpretive Center. The recognized historical importance of our property gives us credibility among potential donors as we continue planning to build Fort de la Présentation.”

From the mid-18th century to the early 19th century the fort at the mouth of Oswegatchie River, under French, British and American flags, influenced the development of Ogdensburg and its role in the history of the United States.

“In addition to honoring the City’s place in American, Canadian, and Native histories, placement of these lands on the National Register of Historic Places positions the Fort La Présentation Association to use the site to continue to play an important role contributing to the development of historic tourism and local hospitality businesses, as well as the overall growth of our local economy,” said Ogdensburg City Manager Arthur J. Sciorra.

Until the building of the Interpretive Center and Fort de la Présentation, the interpreted site on Lighthouse Point will attract tourists who would not usually venture this way and indicate to residents the significance of their community’s history. 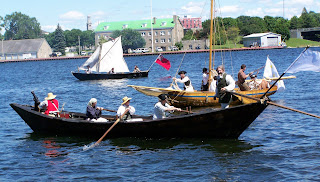 Between $250,000 and $500,000 was injected into the regional economy by the Fort La Présentation Association’s Founder’s Day Weekend, July 16-18, 2010, according to Association President Barbara O’Keefe. The financial impact was made by the 3,000 visitors and 700 re-enactors who came to Ogdensburg to commemorate the last Battle of the French and Indian War.

In an exit survey conducted Friday, Saturday and Sunday, visitors were asked to estimate their expenditures related to the event in terms of transportation, meals and beverages, accommodation, and all other expenses.

Harold G. Needham, a consultant to the Fort La Présentation Association, designed the survey, analyzed the data and wrote the report. He took a very conservative approach. Needham disregarded the high-end estimates of the dollar value in each expenditure range selected by respondents; he also disregarded estimates exceeding 50 percent of the dollar range selected by respondents in each expenditure category.

As to the infusion of visitors’ cash Needham wrote, “While most of this would have been spent in the immediate area, some of it impacted on the economy elsewhere in the state and nation, and a very small part in adjacent areas of Canada.”

“As the Founder’s Day Weekend re-enactment and colonial trade fair has grown over the years, we have assumed a significant amount of money is spent locally by the visitors and re-enactors,” said Barbara O’Keefe, President of the Fort La Présentation Association. “We decided this year, when we hosted New York State’s final 250th anniversary commemoration of the French and Indian War, would be a good opportunity to gauge the potential economic impact of this tourist-focused event, and we have been pleasantly surprised.”

This is the second survey conducted for the Fort Association to get a profile of the visitors and their responses to Founder’s Day Weekend activities. However, this is the first look at what the weekend can pump into the economy.

“We know people spent money getting here. Some traveled lengthy distances to get to our re-enactment and colonial trade fair, and some who were here to visit family took in the event,” said O’Keefe. “Regardless, local motels, bed and breakfasts, restaurants and other business saw trade directly linked to Founder’s Day Weekend, and we are very pleased to have helped contribute to their bottom lines.”

Re-enactors and others who brought the mid-18th century to life put their dollars into the local economy. They arrived in Ogdensburg one, two or more days before the Friday opening and some did not leave until Monday.

In addition, St. Lawrence County and the City of Ogdensburg benefit from their share of the sales tax collected by local merchants.

As of the end of September 2010, the financial statements of the Fort La Présentation Association indicate almost $59,000 had been spent in the local economy on the event. When bills yet to be received are paid, the total will rise to at least $60,000, giving the event a total economic impact of between $300,000 and $550,000

“The major events hosted by the Fort translate into enough additional business for our restaurant that we can do improvements that we otherwise could not afford,” said Deb Janson, owner of the Freight House Restaurant. “The Fort brings in the additional customer base that establishments like ours really need to move ahead.”

Of the visitors to Founder’s Day Weekend, 61.7 percent live in St. Lawrence County and another 18.9 percent elsewhere in New York State; 11.7 percent came from other U.S. states and 7.6 percent from Canada. 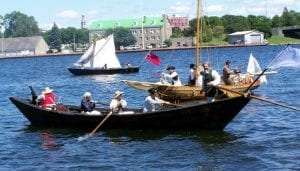 Stepping into the past at Founder’s Day Weekend in Ogdensburg, NY July 18-19 is an opportunity for visitors to witness the crafts and trades of our ancestors beyond the activities of the French and Indian War re-enactment.

To kick off the weekend, there will be a free concert of colonial music Friday evening in Library Park. Linda Russell, an 18th-century balladeer, will perform courtesy of the St. Lawrence County Arts Council. Ms. Russell will also perform Saturday and Sunday on Lighthouse Point. END_OF_DOCUMENT_TOKEN_TO_BE_REPLACED