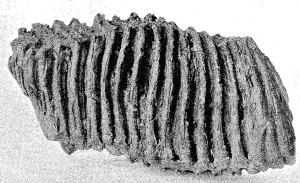 The Warren County Historical Society is welcoming back to the county a giant mammoth tooth found in Queensbury before the Civil War.

The prehistoric elephant roamed Warren County some 13,000 years ago when the county was more tundra-like with sedges and lichens in a very cold environment left by the retreating ice sheet on its way back North. END_OF_DOCUMENT_TOKEN_TO_BE_REPLACED

State Historian Devin Lander is doing an outstanding job but he is still working without staff. New York passed its 240th anniversary last spring with no official commemoration. The Researching New York Conference last month was one of the best ever, but the New York State History Conference has been discontinued. November, New York State History Month, has come and gone once again with little public attention. The demise of NYSHA leaves a big gap in the state’s historical enterprise. END_OF_DOCUMENT_TOKEN_TO_BE_REPLACED

I recently reported on a petition initiated by the New York Academy of History in support of local and state history.

Much of the details of the letter were against recent actions of the New York State Historical Association (NYSHA), an organization that has undergone some changes in 2017 as reported in New York History Blog by editor John Warren and columnist/advocate Bruce Dearstyne.

My post led to a response by Paul S. D’Ambrosio, President & CEO, Fenimore Art Museum & The Farmers’ Museum aka NYSHA. He sent me an email asking if I would publish it. I agreed to do so and he then sent a second draft which is published below. END_OF_DOCUMENT_TOKEN_TO_BE_REPLACED

New York missed its 240th birthday on April 22, the date the first state constitution was promulgated and the state came into existence in 1777. There were no official commemorations so far as I know. This would have been a particularly opportune time for attention to the state’s founding document since New Yorkers will be voting in November on whether to authorize a constitutional convention to revise or replace the current one. This fall would be a good time to commemorate other events, including the election of the first governor and legislature and the launching of the state’s government in the first capital, Kingston, by the end of 1777.

These potential opportunities to promote state and local history point again to the need for a statewide history association, committee or group to supplement the excellent work being done by the State Historian, the State Museum, the State Archives and other public history programs.

Maybe what we need is something to replace NYSHA. END_OF_DOCUMENT_TOKEN_TO_BE_REPLACED