In the summertime, the parking lot at the end of Thirteenth Lake Road in the town of Johnsburg, Warren County, will be crowded with the cars and trucks of people there to hike, paddle, and camp.

Few of these visitors realize that sixty years ago when they stood on the shore, they would have seen a large, modern-looking hotel sitting on the hillside overlooking the lake. This is the story of that enterprise and those who kept it up and running for over 100 years. END_OF_DOCUMENT_TOKEN_TO_BE_REPLACED 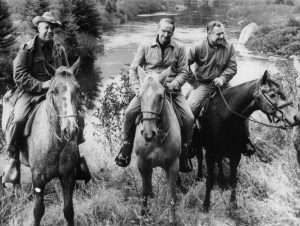 Paul was immediately comfortable, having eaten here many times. Someone greeted him, a fellow deer hunter who remembered him. We took a booth and Paul ordered a steak. END_OF_DOCUMENT_TOKEN_TO_BE_REPLACED

There is an annual tradition near the end of every ski season at Gore Mountain – a party sponsored by the Backwoods Ski Club for the workers and volunteers who make the season happen.

The Club provides a dinner buffet and beverages, and Club members mingle and merge with the lift operators, ski patrol members, ski instructors, snow makers, groomers, maintenance workers, concession and food service workers, office staff, and those who are constantly working to clean up the mess. END_OF_DOCUMENT_TOKEN_TO_BE_REPLACED 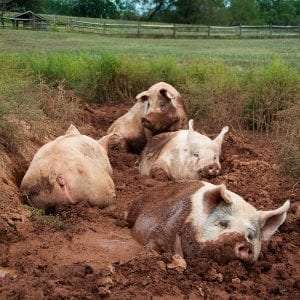 “Hebert Moore’s pig is still at large. Motorists are requested to drive with care in the vicinity,” the Ticonderoga Sentinel reported on July 15th, 1920. “A reward of $1 is offered by L. Lodge to anyone who will catch said pig single handed. Mr. Lodge must witness the catch. $3 if done after dark.” END_OF_DOCUMENT_TOKEN_TO_BE_REPLACED 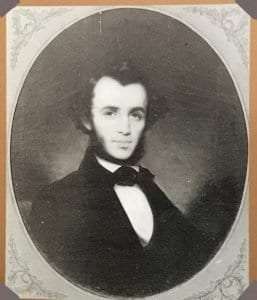 Each summer the wealthy Gilchrist family journeyed north to avoid the hot humid subtropical summers of Charleston. They stayed with maternal family members in the Great Northern Wilderness of New York. (The term Adirondacks is said to have been first used by geologist and surveyor Ebenezer Emmons in 1838 and took some time to come into general use). END_OF_DOCUMENT_TOKEN_TO_BE_REPLACED 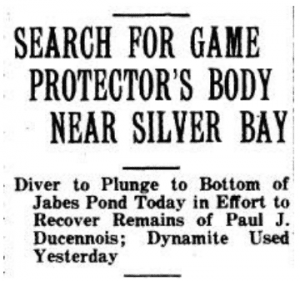 On October 16, 1932, twenty-one-year-old Special Game Protector Paul J. DuCuennois of North Creek, Warren County, disappeared while patrolling Jabe Pond near Lake George; his car was located at the end of the trail to the pond.

He was reported drowned by Charles Foote and Wilson Putnam, who said they saw him go into the water from the other side of water. They told authorities they rowed to the spot of DuCuennois’s swamped and overturned canoe, but could not immediately locate his body. Nearby his jacket lay floating, the men said, and in its pocket, the key to the game warden’s car. END_OF_DOCUMENT_TOKEN_TO_BE_REPLACED

Gore Mountain has announced it is open for scenic skyrides, hiking, lift-serviced downhill mountain biking, and disc golf Thursday-Sunday, from 10 am to 4 pm during the summer. Retail and food service will also be available. END_OF_DOCUMENT_TOKEN_TO_BE_REPLACED 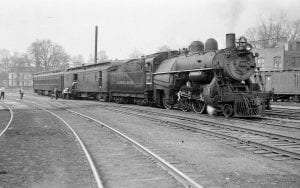 The tracks seen in these photos were part of the original North Creek branch railroad that through the streets of Saratoga Springs. Originally, the line to North Creek (the Adirondack Branch) came off the Delaware & Hudson Railroad’s main line in the freight yard just south of the main Saratoga depot, and ran right down the middle of some streets. Started in 1864 and completed to North Creek in 1871, the street tracks were removed when the entire line was rerouted outside downtown Saratoga Springs. END_OF_DOCUMENT_TOKEN_TO_BE_REPLACED

Teddy Roosevelt is not available to recreate his historic 1901 ride from the North Creek Train Depot, but nationally recognized Roosevelt reprisor Joe Wiegand will be on hand to fill those famous shoes.

Begin the New Year with an afternoon of engaging tunes and tales. Join the staff of the Adirondack Museum for “Working for the Man: Songs and Stories of Adirondack Lumberjacks and Miners.” The special program will be held at the Tannery Pond Community Center in North Creek, New York on Sunday, January 10, 2010 at 3:30 p.m. There will be no charge for museum members and children of elementary school age or younger. The fee for non-members is $5.00.

The historic work of loggers and miners was framed by dangerous conditions, back breaking work, long hours, and low pay. Although daily life was hard and often heartbreaking, it was also filled with music, laughter, stories, and strong community ties.

Born in the Adirondacks, Lee Knight now lives in Cashiers, North Carolina. He is a singer, storyteller, song collector, and teacher of folklore, folk life, and folk music. He performs regularly at concerts, folk festivals, and summer camps, where he tells stories, sings ballads, and calls dances. He has appeared with Pete Seeger, Jean Ritchie, Bill Monroe, Alan Lomax, and many others. He will play traditional hand-made instruments.

Following the program, Lee Knight will perform at the Copperfield Inn from 4:30 p.m. until 6:00 p.m.