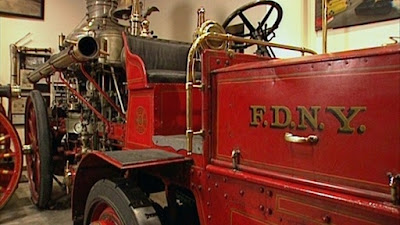 The popular website DocumentaryStorm.com is celebrating its 1st anniversary, and is recommending several documentaries available on the site about New York City for New York History readers. These documentaries that focus on a couple of seldom visited spaces in New York life, the sewer system and the fire department, along with one of New York City’s most visited places. DocumetaryStorm.com is dedicated to finding providing free, full-length documentaries from around the web.

NYC’s Fire Department plays an indispensable role in keeping New York’s citizen’s safe. While September 11th, 2001 shone a very bright and hot media light on the department – rightfully highlighting their training and sacrifice – the department has a sordid and quite remarkable history dating back many centuries. For many decades the firefighters were all community volunteers. This documentary explores the department’s origins and traces the various incarnations, training, and equipment through the 1800’s to today. When was the first fire truck used? How were fires put out in the early 1800’s? What did the firemen used to wear to protect them against fire?

New York from the Underneath

This is a rare and unique glimpse into the sewer system that runs below New York City. Beautifully shot, captivating, and gritty, the documentary traces the underbelly of New York from the Bronx to Queens. Urban Historian Steve Duncan leads the journey through a maze of winding tunnels, man-made waterfalls, and local wildlife. The scars of history’s past is evident in the brickwork and drawings on the wall. We explore more than two centuries of urban planning: a generational patchwork. Half vision, half compromise. The city’s first enclosed sewer system is located on Canal Street and survives intact to this day. Duncan sleeps in the sewers by day and leads us on an entertaining 25 minute tour by day. New York City: like you’ve never seen her before.

The Empire State Building Shall Rise

The New York Public Library’s Bloomingdale Library (150 W 100th St, NYC) will play host to a lecture on the history of the New York City Fire Department on Thursday, October 8, 2009 from 6:00 PM – 7:30 PM. Robert Holzmaier, Chief, Eleventh Battalion which covers Manhattan’s Upper West Side will be discussing fire extinguishing in 1609, the first controversial fire tax; hooks & ladders; horses and dogs; the connection to the city’s water supply; the city’s great conflagrations; attempts to destroy the city by fire; fire company feuds; and the the uses of volunteers.

You can learn more about the history of the New York City Fire Department at: http://www.nyc.gov/html/fdny/html/history/fire_service.shtml