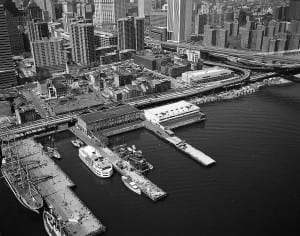 The South Street Seaport is a designated NYC Historic District and is considered the first World Trade Center, as it was NYC’s birth place of commerce. END_OF_DOCUMENT_TOKEN_TO_BE_REPLACED 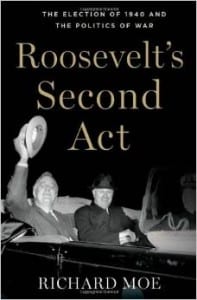 The famous Riddle of the Sphinx asks, “Which creature has one voice and yet becomes four-footed and then two-footed, and finally three-footed?” To which Oedipus answered: “Man, who crawls on all fours as a child, then walks on two feet as an adult, and then as an elder uses a walking stick.”

This is what crossed my mind as I came across a small sculpture of Franklin D. Roosevelt as the Sphinx, with cigarette holder and all, at the Franklin D. Roosevelt Library and Museum gift shop. I’d often find myself browsing the store during breaks from my research there, but the oddity of the sculpture stuck with me as I was unable to answer the riddle of FDR as Sphinx until reading Roosevelt’s Second Act: The Election of 1940 and the Politics of War (Oxford Univ. Press, 2013) by Richard Moe. END_OF_DOCUMENT_TOKEN_TO_BE_REPLACED 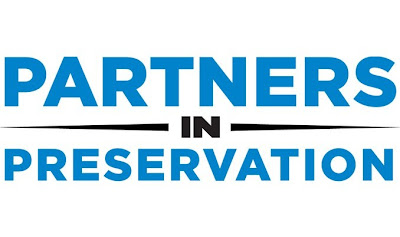 New York City will be this year’s location for Partners in Preservation, American Express and the National Trust for Historic Preservation’s community-based initiative to raise awareness of the importance of historic places. The program will infuse $3 million in grants to preserve the city’s historic buildings, icons and landmarks. The program hopes enlist the aid of New Yorkers, and anyone who loves New York, to vote online for the preservation projects most important to them.

From April 26 to May 21, 2012, anyone 13 years of age and older, anywhere in the world can vote online – either from their web-enabled mobile device, online or on Facebook – for one of 40 to-be-announced historic New York City places, by visiting www.Facebook.com/PartnersinPreservation or www.PartnersinPreservation.com.

The public voting process kicks off April 26 with the announcement of the 40 competing historic sites. Everyone can vote up to once a day, for the same site or for a different site. On May 22, the top three public vote-getters and the grants for their preservation projects will be revealed. 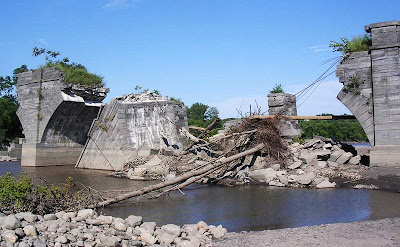 The National Trust for Historic Preservation named America’s State Parks and State-Owned Historic Sites to its 2010 list of America’s 11 Most Endangered Historic Places. This annual list highlights important examples of the nation’s architectural, cultural and natural heritage that are at risk for destruction or irreparable damage.

America’s state parks and state-owned historic sites are threatened – perhaps more than at any other time in recent history – with deep funding cuts and uncertain futures. In response to record-breaking deficits, state governments are cutting funding for state-owned and -managed parks and historic sites from coast to coast. State park systems welcome an estimated 725 million visits every year and include places of national significance – from Native American historic sites to Revolutionary War forts to Civil War battlefields to country estates.

This year nearly 30 states have experienced cuts to parks’ and sites’ budgets, and a recent survey estimates as many as 400 state parks could close.

While providing some short-term budget relief, this approach is expected to actually cost states far more in the long term. Before they can re-open, state-owned and managed resources will require massive investments to undo the damage suffered from abandonment, neglect and deferred maintenance. Although at least 26 states across the country are grappling with this issue, the National Trust cited six prime examples, including New York, New Jersey and Pennsylvania.

* In New York State, Governor Paterson announced the closure of 41 state parks and 14 historic sites, including landmarks like the farm and gravesite of abolitionist John Brown, in North Elba, and the beautiful Georgian-era Philipse Manor Hall, in Yonkers, a vibrant center of local community gatherings and activities.

* In New Jersey, state parks and state-owned historic sites have been on life support for years. Now Governor Christie is slashing the budget of the state agency responsible for parks and historic sites—reducing its funding from $11.6 million to $3.4 million. Christie’s stark budget also eliminates all funding for the Battleship New Jersey, the Old Barracks Museum in Trenton, Morven Museum in Princeton, and the Save Ellis Island organization.

* In Pennsylvania, a drastic 37 percent budget cut forced the closure of Old Economy Village—an exceptionally well-preserved religious colony constructed between 1824 and 1830 and the Commonwealth’s first historic site—along with 11 other sites that will close to the public. With Pennsylvania’s next budget projected to be even more severe, the future of Pennsylvania’s historic resources is in jeopardy.

* In Arizona, $19 million in revenue from the operation of state parks and lottery proceeds was cut in half, and thirteen of the state’s 31 parks were forced to close. Ironically, a recent study shows how Arizona state parks—when open—attract 2.3 million visitors annually, generating $266 million of direct and indirect economic impact.

* In California, twice in the last two years, budget challenges have put the state’s 278 parks at risk, prompting their placement on the 2008 list of America’s 11 Most Endangered Historic Places. Chronic underfunding has already impacted 150 parks with reduced services and part-time closures. In a politically-charged climate, a ballot measure slated for November will determine if voters approve a long-term, stable funding solution.

* In Missouri, over 120 state park jobs were eliminated due to the downturn in the economy, making a bad situation even worse. With an existing backlog of deferred maintenance totaling more than $200 million, the state park system’s 1,845 structures—700 of which are historic—are put at even greater risk.

For more information about the states and historic sites facing budget cuts across the country, visit www.PreservationNation.org/11Most.

Black Mountain, Harlan County, Ky. —Nestled at the base of Eastern Kentucky’s rugged Black Mountain, the historic mining towns of Benham and Lynch are working hard to define a future beyond coal. The towns, which have created well-respected heritage tourism sites and are working to revitalize their main streets, now face the threat of multiple surface and deep mining permits on and around Black Mountain—a move that would be tremendously harmful to Black Mountain’s natural beauty, fragile ecology and growing tourism industry.

Hinchliffe Stadium, Paterson, N.J. —Once the pride of Paterson, N.J., Hinchliffe Stadium is one of the last surviving ball parks of baseball’s Negro League. Today, the 10,000-seat, poured-concrete Art Deco stadium that was home to the New York Black Yankees and legendary player Larry Doby, is closed and dangerously deteriorated.

Industrial Arts Building, Lincoln, Neb.—For nearly a century, this dramatic trapezoidal exposition space with natural skylights, intricate roof trusses and a four-story fountained interior, has showcased the best of Lincoln, Neb. Despite its long, proud history, the Industrial Arts Building will soon meet the wrecking ball unless a developer steps forward to rescue and reuse the building.

Juana Briones House, Palo Alto, Calif.—In the heart of Silicon Valley stands the oldest structure in Palo Alto, built by one of the original Hispanic residents of San Francisco, a pioneering woman who was a rancher, traditional healer and entrepreneur. The 1844 adobe home is a rare reminder of California’s rich Spanish and Mexican history. Today this California State Historic Landmark sits abandoned, deteriorated, exposed to the elements and threatened by demolition.

Merritt Parkway, Fairfield County, Conn.—Spanning 37.5 distinctive miles and celebrated for its diverse collection of decorative bridges and lush, natural landscaping, Merritt Parkway remains, 70 years after it was constructed, one of America’s most scenic roads. To accommodate increased traffic on the parkway, the cash-strapped Connecticut Department of Transportation is not performing necessary maintenance and has moved to realign roads, replace bridges and redesign interchanges, all at the cost of the parkway’s unique character.

Metropolitan A.M.E. Church, Washington, D.C.—A major landmark of African American heritage and one of the most important religious institutions in the United States, Metropolitan A.M.E. Church’s red brick Victorian Gothic-style building, completed in 1886, hosted the funeral of congregant Frederick Douglass in 1895 and Rosa Parks a century later. Years of water infiltration and damage caused in part by adjacent construction projects have compromised the structure, prompting the dedicated congregation to launch a national capital campaign to rescue and restore this irreplaceable house of worship.

Pågat, Yigo, Guam—The island of Guam, the westernmost United States territory in the Pacific, is home to the Chamorro people who maintain a thriving culture dating back thousands of years. With the United States military’s announced plans for a massive buildup on the island, many residents are concerned about the potentially devastating impact on the island’s cultural resources, including one of Guam’s most treasured sites, the ancient Chamorro settlement of Pågat.

Saugatuck Dunes, Saugatuck, Mich.—Along the shores of Lake Michigan, the 2,500 acres that comprise the Saugatuck Dunes Coastal Area boast a spectacular, sparsely-developed landscape of sand dunes, water, woods and wetlands. Home to several endangered species and a large number of significant historic and archeological sites, Saugatuck Dunes and its surrounding community are threatened by a proposed 400-acre, residential development, to include a marina, hotel, restaurant and retail complex.

Threefoot Building, Meridian, Miss.—For 80 years, this 16-story Art Deco, lavishly decorated, granite-clad skyscraper has been a mainstay of downtown Meridian, Miss. Although a developer expressed interest in rehabilitating the deteriorated building, the City of Meridian has been unable to provide gap financing or other incentives and locals fear that Threefoot’s bright future may end in demolition.

Wilderness Battlefield, Orange and Spotsylvania Counties, Va.—One of the most significant and bloodiest engagements of the Civil War, the Battle of the Wilderness marked the first time that legendary generals Robert E. Lee and Ulysses S. Grant faced off against one another. It is here—in an area known for its rolling landscapes and distant Blue Ridge Mountain views—that Walmart intends to trample on American heritage by constructing 240,000 square feet of “big box” commercial sprawl within the historic boundaries of Wilderness Battlefield and immediately adjacent to the Fredericksburg & Spotsylvania National Military Park. 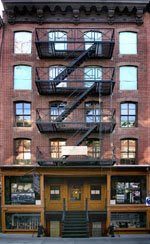 This years list includes eleven threatened one-of-a-kind historic treasures. Listing them as threatened raises awareness and helps rally resources to save them. The two New York locations on the list are: END_OF_DOCUMENT_TOKEN_TO_BE_REPLACED