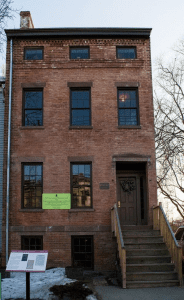 Stephen and Harriet Myers were instrumental in the success of the Underground Railroad during the mid-nineteenth century. Today, their former residence is preserved as a significant historic site in Albany and a cornerstone of African American heritage in the Arbor Hill neighborhood. END_OF_DOCUMENT_TOKEN_TO_BE_REPLACED