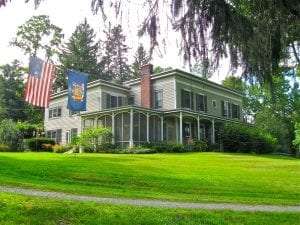 The house played an important role in the area’s Revolutionary War history, serving as a field hospital for the British troops and the German soldiers who fought with them in the Saratoga campaign during October 1777. END_OF_DOCUMENT_TOKEN_TO_BE_REPLACED

This year’s commemoration of the Battles of Saratoga of October 1777 coincides with the 250th birthday of The Marshall House, a Schuylerville home that bore witness to those momentous events.

Albany merchant Peter Lansing began construction of the house overlooking the Hudson River in 1770. It was commandeered as a field hospital by the invading army of British General John Burgoyne in the fall of 1777. Following the British rout in the second Battle of Saratoga, the makeshift field hospital filled with wounded soldiers as well as women and children attached to the army. END_OF_DOCUMENT_TOKEN_TO_BE_REPLACED 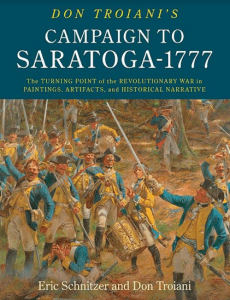 Don Troiani’s Campaign to Saratoga – 1777 chronicles the British attempt to gain control of the Lake Champlain/Lake George/Hudson River waterways in the early days of the American Revolution. It reveals the real circumstances of the murder of young Jane McCrea, whose death was thought to have helped rally American militia to oppose the British invasion, and the role of the Marshall House as a hospital for the British army. It debunks many myths associated with the campaign such as those related to the figure of British General John Burgoyne (known as Gentleman Johnny). END_OF_DOCUMENT_TOKEN_TO_BE_REPLACED 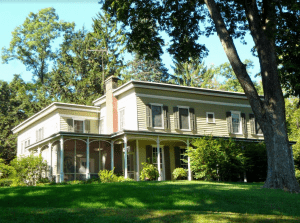 The Marshall House, a Revolutionary War-era structure, is set to open its doors for a tour and dramatic historical interpretation on August 4 from 3 to 6 pm, following Schuylerville’s annual Turning Point Parade.

Built alongside the Hudson River in the early 1770s, the Marshall House was commandeered as a field hospital by the British forces of General John Burgoyne during the Battles of Saratoga in mid-1777. END_OF_DOCUMENT_TOKEN_TO_BE_REPLACED

The Marshall House, one of the few remaining Revolutionary War-era structures in the Schuylerville area, is set to open its doors for a tour and historical reenactment ahead of a free concert offered by the Albany Symphony Orchestra at the nearby Hudson Crossing Park, on Thursday, June 6th.

The Marshall House event offers an opportunity to visit a private home that was a witness to the Battles of Saratoga and learn about the events that transpired there. END_OF_DOCUMENT_TOKEN_TO_BE_REPLACED

One of the area’s few remaining Revolutionary War-era structures, The Marshall House is set to open on September 16 to coincide with the Saratoga 1777 Civilian Weekend on September 15-16.

Historical reenactors will gather at the Saratoga National Historical Park to recreate the atmosphere of the army camps ahead of the pivotal battles that took place on the same ground 241 years ago. The reenactments will show many women and children in the camps, as was common during the 18th century. The some of these women were paid to perform tasks such as caring for the wounded and foraging for food; others accompanied their husbands and hosted fine meals for officers. END_OF_DOCUMENT_TOKEN_TO_BE_REPLACED

The Marshall House in Schuylerville, Saratoga County, is set to open at 4 pm on June 28.

Visitors will have the chance to walk on the original floors of the 18th century home and experience the cellar that sheltered a group of women, children, and wounded soldiers from the fighting around them during pivotal battles of the Revolutionary War. END_OF_DOCUMENT_TOKEN_TO_BE_REPLACED