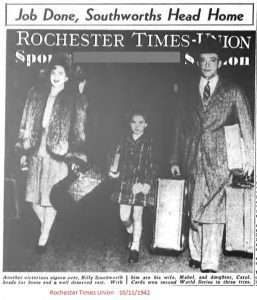 The National League entry had played in St. Louis since 1892, as one of the surviving franchises from the American Association, which had failed financially the year before. The Brown Stockings took their name from their hose color in the best 1890s baseball tradition. The team changed their name in 1899 to Perfectos and in 1900, mercifully changed it again to Cardinals. END_OF_DOCUMENT_TOKEN_TO_BE_REPLACED

“Sing a song of sixpence, and eke of dollar bills,” he wrote in a poetic ditty, published October 3rd, 1922 in The Post-Star of Glens Falls. “Four and thirty thousand fans, paying for their thrills.” END_OF_DOCUMENT_TOKEN_TO_BE_REPLACED

During World War II, when many athletes went into military service, the military post at the Fort Ontario State Historic Site became a regional baseball powerhouse, due in part to the posting there of former professional and minor league ballplayers, even including a former starting pitcher for the New York Yankees. END_OF_DOCUMENT_TOKEN_TO_BE_REPLACED

By 1950, Satchel Paige was a star of the Negro Leagues and a World Series winner with the Cleveland Indians. He spent most of that year barnstorming across the United States which is what brought him to Riverhead Stadium on Long Island.

In this episode of the Long Island History Project, librarian and historian Fabio Montella relates his research into Satchel, Riverhead, and the deeper connections between Long Island and Negro League baseball. END_OF_DOCUMENT_TOKEN_TO_BE_REPLACED 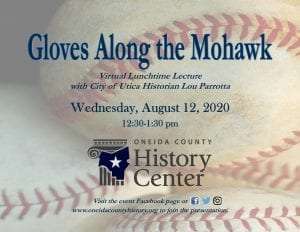 The Oneida County History Center will host a virtual talk by Lou Parrotta, the City of Utica Historian, on the history of baseball in the Mohawk Valley, and the local players who made it to the Major Leagues, set for Wednesday, August 12th. END_OF_DOCUMENT_TOKEN_TO_BE_REPLACED

This week on The Historians Podcast, Brad Balukjian tracks down ballplayers from a single pack of baseball cards from 1986 for his book The Wax Pack: On the Open Road in Search of Baseball’s Afterlife (Univ. of Nebraska Press, 2020). END_OF_DOCUMENT_TOKEN_TO_BE_REPLACED 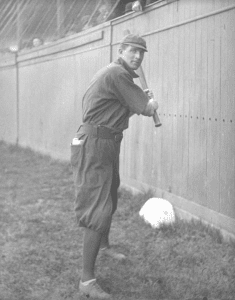 In 1905, Professional baseball player James Bentley “Cy” Seymour (1878-1919), led the National League, and all of professional baseball, in batting with a .377 average, hits with 219 and runs-batted-in with 121 with the Cincinnati Reds. He played for the Cincinnati Reds, Baltimore Orioles, and the New York Giants throughout his career. END_OF_DOCUMENT_TOKEN_TO_BE_REPLACED 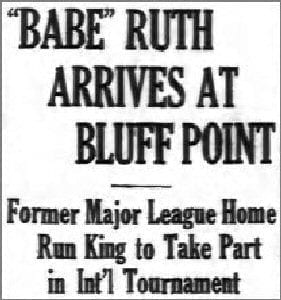 Coincidentally, she wasn’t the only Babe from the stratosphere of sports fame to visit Plattsburgh in the 1930s. Even more unlikely is that both Babes were among the most famous athletes in America, and both were able competitors in sports other than the one that brought them the greatest fame. Didrikson, a track-and-field gold medalist, brought her basketball team to Plattsburgh, while Babe Ruth, a baseball giant, came north to play in an international golf tournament. END_OF_DOCUMENT_TOKEN_TO_BE_REPLACED