These two independent research libraries will jointly award approximately thirty one-month fellowships for research in residence in either or both collections during 2010-2011. The two institutions, adjacent to each other in Center City Philadelphia, have complementary collections capable of supporting research in a variety of fields and disciplines relating to the history of America and the Atlantic world from the 17th through the 19th centuries, as well as Mid-Atlantic regional history to the present. For information on the collections, visit www.hsp.org and www.librarycompany.org.

One-month fellowships carry a stipend of $2,000 and are tenable for any one-month period between June 2010-May 2011. Two Barra Foundation International Fellowships, each for $2,500 plus a travel allowance, are reserved for foreign national scholars resident outside the U. S. Some of the short-term fellowships provide for study in specific fields, such as ethnic and immigrant history; history of the book; African American History; visual culture; and economic history (through the Library Company’s Program in Early American Economy and Society). For more detailed information about all of these fellowships, go to www.librarycompany.org/fellowships. We invite inquiries about the appropriateness of proposed topics to jgreen@librarycompany.org. The Library Company’s Cassatt House fellows’ residence offers rooms at reasonable rates.

The deadline for receipt of one-month fellowship applications is March 1, 2010, with a decision to be made by April 15. To apply, visit www.librarycompany.org/fellowships, fill out an electronic cover sheet, and submit one portable document format (PDF) containing a résumé and a 2-4 page description of the proposed research. One letter of recommendation should arrive under separate cover in PDF format as well. Please email materials to fellowships@librarycompany.org. If you wish you apply for more than one fellowship, simply check more than one box on your electronic cover sheet.

The Library Company also supports dissertation research in residence through the Albert M. Greenfield Foundation Fellowship (on any subject relevant to its collections) and the Program in Early American Economy and Society Fellowship (for research in economic history). The term of these fellowships is from September 2010 to May 2011, with a stipend of $20,000. The awards may be divided between two applicants, each of whom would spend a semester in residence. The application deadline and procedures are the same as for the one-month fellowships as described above, with the addition of a second letter of reference and a writing sample of about 25 pages.

The McNeil Center for Early American Studies, in collaboration with the Library Company, offers two dissertation fellowships in early American literature and material texts, supported by a new grant from the Andrew W. Mellon Foundation. Fellows will be in residence from July 2010 through July 2011. The stipend for a 13-month term will be at least $28,000. To apply go to www.mceas.org. Deadline, March 1, 2010.

To celebrate the 25th Anniversary of the New York State Writers Institute, former New York State Governor Mario Cuomo and Pulitzer Prize-winning biographer Doris Kearns Goodwin will join Institute Executive Director William Kennedy and Director Donald Faulkner on stage to reminisce about the Institute’s past, celebrate its present, and discuss its future. A short video about the Institute highlighting memorable guests and events from its 25 year history will also be screened [you can see some early video samples here]. In addition the Institute will announce the first selections in its list of “25 Uniquely New York Books,” as chosen by 25 renowned New York state writers. The event, which is free and open to the public, will take place on Monday, November 16, 2009 at 8:00 p.m. in Page Hall, 135 Western Ave., on the University at Albany’s downtown campus.

In 1984, Governor Mario Cuomo signed into law the legislation creating the Writers Institute, giving it a mandate to provide “a milieu for established and aspiring writers to work together… to increase the artistic imagination.” Since then the Institute has hosted over 1,000 visiting writer appearances, screened over 400 films, and presented dozens of writing workshops, symposia, and special events, making it one of the premier literary arts organizations in the country.

The video presentation will provide an overview of the history of the Institute, its founding, and growth over the past 25 years. Included will be clips of such memorable guests as Margaret Atwood, Shelby Foote, Joyce Carol Oates, David Sedaris, Hunter Thompson, and Kurt Vonnegut.

“As part of our 25th anniversary, we have invited 25 renowned New York writers to choose their favorite book about New York—state or city,” said Institute Director Donald Faulkner. “Books that focus on New York themes and landscapes have impacted readers for generations. We thought it would be appropriate to draw attention to some of these books to provide a glimpse of the enormous literary traditions that this state and its authors have to offer. This is not intended to be a ‘best of’ list, but a distinctive and slightly unconventional guide to reading more deeply into the spirit of the Empire State,” Faulkner explained. The first ten selections will be released on November 16, with the remaining 15 titles announced throughout the next several months.

Mario Cuomo, one of the great orators and intellectuals of 20th century American politics, served as the 52nd Governor of the State of New York from 1983 to 1994. He has also published several notable books, including political diaries, collections of speeches, and two books on Abraham Lincoln— most recently, “Why Lincoln Matters: Today More Than Ever” (2004). In advance praise, Arthur M. Schlesinger, Jr. called the book, “A thoughtful and challenging meditation on what Lincoln’s wisdom tells us we Americans should be doing today and tomorrow.”

Doris Kearns Goodwin is a Pulitzer Prize-winning biographer, author of bestsellers about Lyndon Johnson, the Roosevelts, and the Kennedys. Her newest book is “Team of Rivals: The Political Genius of Abraham Lincoln,” which, by many accounts, helped shape President Obama’s political philosophy. A former professor of government at Harvard University, and assistant to President Lyndon Johnson, Doris Kearns Goodwin appears frequently as a political commentator on network and public television. A long-time friend of the Institute, she has made three previous appearances as a Visiting Writer (in 1991, 1995 and 2005). She is currently researching her next book which is set partly in Albany— a new biography of Teddy Roosevelt.

For additional information, contact the Writers Institute at 518-442-5620 or online at http://www.albany.edu/writers-inst.

Alan Price, Professor of English at the Pennsylvania State University will offer a lecture entitled “The Hudson Valley Through Edith Wharton’s French Lens” tonight (Tuesday, November 3rd) at Poughkeepsie’s Marist College. The event will begin at 7 pm in the Hudson River Valley Institute‘s Henry Hudson Room. A reception with light refreshments will follow.

The event is sponsored by the Marist College Honors Program, the School of Liberal Arts, and the Hudson River Valley Institute. 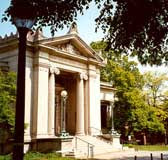 The C.V. Starr Center for the Study of the American Experience and the John Carter Brown Library are pleased to announce a new research and writing fellowship that may be of interest to members of the list. The Hodson Trust-John Carter Brown Fellowship supports work by academics, independent scholars and writers working on significant
projects relating to the literature, history, culture, or art of the Americas before 1830. The fellowship is also open to filmmakers, novelists, creative and performing artists, and others working on projects that draw on this period of history.

The fellowship award supports two months of research (conducted at the John Carter Brown Library in Providence, R.I.) and two months of writing (at Washington College in Chestertown, Md). Housing and university privileges will be provided. The fellowship includes a stipend of $5,000 per month for a total of $20,000.

Deadline for applications for the 2010 fellowship year is *July 15, 2009*. For more information and application instructions, visit the Starr Center’s website at http://starrcenter.washcoll.edu.