More than two hundred Civil War veterans and a large crowd of citizens gathered in Little Valley, the county seat, on September 7, 1914, for the dedication of the Cattaraugus County Memorial and Historical Building. A plaque above the entrance stated the structure’s purpose: “To the memory of its soldiers and sailors in the War of the Rebellion, this building is erected by Cattaraugus County.” END_OF_DOCUMENT_TOKEN_TO_BE_REPLACED 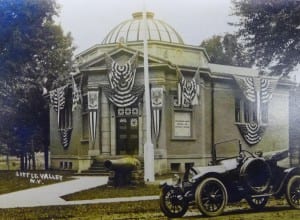 The Landmark Society of Western New York has awarded a $2,500 grant to promote an effort to save the Cattaraugus County Civil War Memorial & Historical Building in Little Valley, NY.  The grant was made to the Citizens Advocating Memorial Preservation (CAMP), a local citizen group formed to stop plans to demolish 100-year-old building dedicated to Civil War Veterans

The funds will be used to develop a preliminary preservation plan.  The work will be performed by Clinton Brown Company, which specializes in renewing historic buildings. END_OF_DOCUMENT_TOKEN_TO_BE_REPLACED