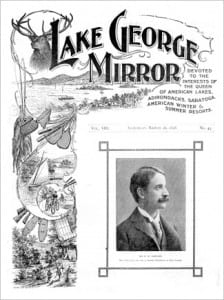 The exhibit includes reproductions of covers from 1880 to the present, artifacts such as the burgee from the small steamboat in which the editor gathered news in the 1890s, books and brochures promoting Lake George and its businesses which were printed by the publishers in the 1940s and 50s and the stories of those who have owned and edited the newspaper. Tony Hall, editor of the Lake George Mirror will give a talk at the Museum on Wed July 9, at 7pm, when the Association will host a reception for this exhibit. END_OF_DOCUMENT_TOKEN_TO_BE_REPLACED

The governor chose that date because it coincided with a memorial service to the late Mrs. LaRose at the Fort George Battleground Park on the Beach Road at Lake George. This was an appropriate site for the service because Winnie, more than anyone else, was responsible for turning this swampy piece of ground into a park for people to enjoy. But it was done not only for people. As Victor Glider, a good friend and now retired as director of Environmental Conservation Field Services, told the gathering, Winnie insisted on clearing away the brush so that the statue of the martyred Father Jogues would have a good view of the lake where he served his mission in the 17th century. END_OF_DOCUMENT_TOKEN_TO_BE_REPLACED