There have been many noted murder trials in Saratoga county since the first court was held in the town of Stillwater May 10, 1791 – 100 years ago. The court now in session at Ballston Spa meets about five miles from where the first court was held, at the residence of Samuel Clark, near East Line, Judge John Thompson of Stillwater [then] presiding, he having received the appointment as the first judge of Saratoga county from Governor Clinton. END_OF_DOCUMENT_TOKEN_TO_BE_REPLACED

The new feature documentary, My Native Air: Charles Evans Hughes and the Adirondacks, co-produced by MDT Publishing and Snarky Aardvark Films, is premiering on-demand in a limited run from January 15th to February 15th, 2021. END_OF_DOCUMENT_TOKEN_TO_BE_REPLACED

In the early 1970s, American artists Edward Kienholz and Nancy Reddin Kienholz began work on The Caddy Court, a 1966 Dodge van between the front and back ends of a 1978 Cadillac, which reimagines the Supreme Court of the United States in one of its original functions as a “riding circuit” court. END_OF_DOCUMENT_TOKEN_TO_BE_REPLACED 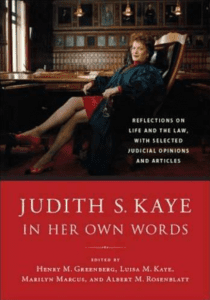 The new book Judith S. Kaye in Her Own Words: Reflections on Life and the Law, with Selected Judicial Opinions and Articles (Excelsior Editions, 2019), edited by Henry M. Greenberg, Luisa M. Kaye, Marilyn Marcus, and Albert M. Rosenblatt, is a memoir and selected writings by the former Chief Judge of New York’s highest court, the Court of Appeals, Judith S. Kaye.

During her long career, Kaye distinguished herself as a lawyer, jurist, reformer, mentor, and colleague, as well as a wife and mother. Bringing together Kaye’s own autobiography, completed shortly before her death, as well as selected judicial opinions, articles, and speeches, Judith S. Kaye in Her Own Words makes clear why she left such an enduring mark upon the court and beyond. END_OF_DOCUMENT_TOKEN_TO_BE_REPLACED