Equality Day has been observed on August 26 since 1971 when the efforts of Congresswoman Bella Abzug succeeded in commemorating the passage of the Nineteenth Amendment to the U.S. Constitution – the Woman Suffrage Amendment. The final programs of the 2011 Peterboro Heritage season recognize women of the 19th Century who laid the ground work for extending suffrage to disenfranchised groups.

Equality Day Weekend will be observed in Peterboro by two presentations on three women who led the women’s rights movement. On Saturday, August 27 at 2 p.m. author Penny Colman presents Elizabeth Cady Stanton and Susan B. Anthony: A Friendship that Changed the World, and signs her new book by the same name at the Gerrit Smith Estate National Historic Landmark, 4543 Peterboro Road, Peterboro. The next day Dr. Carol Faulkner presents her new biography Lucretia Mott’s Heresy: Abolition and Women’s History in 19th Century America at the National Abolition Hall of Fame and Museum, 5255 Pleasant Valley Road, Peterboro.

The Fourth Annual Elizabeth Smith Miller In the Kitchen Bloomer Tea will be held on Sunday, September 25 at 12:30 at the Smithfield Community Center with Dr. Judith Wellman speaking on Peterboro and the Road to Seneca Falls. Debra Kolstrud, the owner of the historical home at 9 S. William Street in Johnstown NY where Susan B. Anthony boarded in 1884 when she and Elizabeth Cady Stanton wrote the third volume of their History of Woman Suffrage, will update on activities in Johnstown, Stanton’s hometown. Selected letters between cousins Elizabeth Smith Miller and Elizabeth Cady Stanton will be read. (Reservations are required.: $35 by August 27. $40 by September 17.) Seating is limited. For more information and online reservations visit www.inthekitchentea.com.

On Saturday, October 22 the National Abolition Hall of Fame and Museum will induct Abby Kelley Foster, the 19th Century Worcester abolitionist and women’s rights activist, into the Hall of Fame at ceremonies held at Colgate University. Stacey Robertson, Director of Women’s Studies program at Bradley University in Peoria IL, presents Abby Kelley Foster: A Radical Voice to the West at 12:30 pm in Golden Auditorium. That evening Lynne McKenney Lydick, Worcester Women’s History Project, will perform Yours for Humanity, a one woman play about Foster.

The Gerrit Smith Estate National Historic Landmark and the National Abolition Hall of Fame and Museum are open from 1 – 5 p.m. on Saturdays and Sundays from May 14 to October 23 in 2011. Admission to each site is two dollars. Stewards and students are free. For more information: Gerrit Smith Estate National Historic Landmark, 4543 Peterboro Road, Peterboro NY 13134-0006. Call 315-684-3262 or visit online. 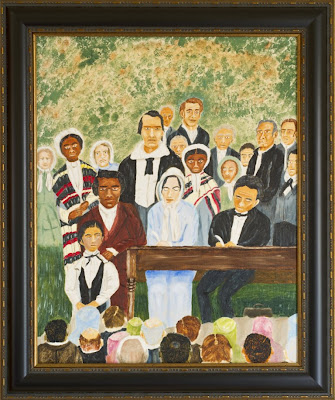 In August 1850 Gerrit Smith and Frederick Douglass organized a two day convention of abolitionists to protest Congressional debate on the proposed Fugitive Slave Act of 1850. 2,000 people attended the meeting in Cazenovia which Ezra Greenleaf Weld captured in the famous daguerreotype image owned by the Madison County Historical Society in Oneida NY. At 2 p.m. on Sunday, August 21, the 151st anniversary of the first day of that Cazenovia Convention, Norman K. Dann Ph.D. and W. Edward Edmonston Ph.D. will present Protest to the 1850 Fugitive Slave Act.

Norm Dann, professor emeritus Morrisville State College, will provide a brief chronology of the events that led to the second of two laws to return escaped slaves, and outline the horrendous intent and the dreadful impact of the law on slaves and free citizens. Dann is the author of Practical Dreamer: Gerrit Smith and the Crusade for Social Reform (2009), a Steward at the Gerrit Smith Estate National Historic Landmark, and a founder and member of the Cabinet of Freedom for the National Abolition Hall of Fame and Museum.

Bill Edmonston holds Ph.D. in Clinical Psychology and taught for four years in the School of Medicine, Washington University (St. Louis) before coming to Colgate University where he taught Neuroscience/Psychology for 29 years. While at Colgate he was named New York Professor of the Year and a National Gold Medalist in the CASE Professor of the Year Awards program (1988). Edmonston also held a Fulbright teaching fellowship (1982) at the University of Erlangen, Germany.

Edmonston has published three professional books, one book on the American Civil War, and two mystery novels. From 1989 to 2005 Bill and his wife Nellie, had a small publishing firm (Edmonston Publishing, Inc.) that specialized in original journals and memoirs of the American Civil War. Learning of the Cazenovia Fugitive Slave Law Convention through the publishing company’s participation in the Annual Peterboro Civil War Weekend, Edmonston became especially curious about two aspects of that convention: 1) The Edmonson sisters, and 2) the lack of a pictorial depiction of the meeting other than the well-known daguerreotype.

The Edmonson sisters, who escaped slavery and who were in attendance at the Cazenovia meeting, had lived in the same area of Montgomery County, Maryland, where Bill’s ancestors had resided and held slaves. Knowing that the family name is variously spelled, Edmonston set upon a search for a possible common ancestor with the Edmonson sisters.

In 2010 Bill created an oil painting of the central figures of the Cazenovia Convention daguerreotype and donated it to the Gerrit Smith Estate NHL. Bill took up painting about a dozen years ago, and paints “whatever strikes my fancy,” including landscapes, seascapes, cityscapes, still-life, people, and trompe l’oeil. Bill’s oil paintings have appeared in shows in Cooperstown, Utica, Old Forge, Albany and other venues in the upstate region. His works are in private collections in Philadelphia, New York City, Virginia Beach, Munich, Germany and the Central New York area. 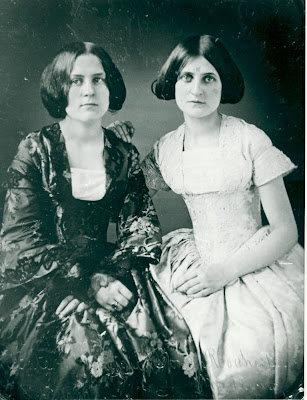 Spiritualism was born in the spring of 1848 when Margaret and Kate Fox heard strange rappings in their Hydesville NY bedroom. Within two years the two “Rochester Rappers” with their sister Leah were touring the country communicating with spirits. The Free Church of Peterboro was one site for the rapping demonstrations. “Scraps of paper in the Gerrit Smith Papers showing questions posed to a spirit medium … revealed that the family attempted to communicate with their loved ones, including Fitzhugh and Peter, after they had died,” according to one historian.

At 2 pm on Sunday, July 24 the Gerrit Smith Estate National Historic Landmark in Peterboro will host programs on 19th Century spiritualism with particular attention to the Fox Sisters and Peterboro’s connections to the spiritualism movement. The program is open to the public and free.

The featured speaker Nancy Rubin Stuart (Osterville, Mass) will present Maggie Fox, Victorian America’s Reluctant Spiritualist. Upstate New York teenager Maggie Fox (1833-1893) rose to national fame as Victorian America’s “reluctant spiritualist.” Young and beautiful, Maggie’s alleged ability to communicate with spirits in America’s first séances of 1848 astounded the press, and made Maggie and her sisters the darlings of Broadway. Maggie inspired hundreds of imitators, and fascinated the most prominent men and women of her era, among them Horace Greeley, James Fenimore Cooper, Harriet Beecher Stowe, Mary Todd Lincoln, William Lloyd Garrison, Nathaniel Hawthorne, and William James. After a passionate love affair and secret marriage to distinguished Arctic explorer Dr. Elisha Kent Kane in 1856, during which Maggie promised to give up mediumship, her life took surprising twists and turns, culminating with a startling confession in 1888 at the New York Academy of Music. The lecture is accompanied by slides of Maggie Fox and her era.

Rubin explains that her purpose is neither to prove nor disprove the veracity of spirit communication, but rather to illustrate how 150 years ago the Fox sisters’ introduction of that idea swept through America and why it continues to fascinate people today. Maggie’s story is important, Rubin believes, because of passion – the passionate longing that 19th C. Americans had to once again talk with their beloved dead, and the passionate romance between Fox and Kane.

After Stuart’s presentation, popular local performers and sisters Darothy DeAngelo and Sue Greenhagen will provide a light-hearted look at early spiritualism with a vignette of the Fox Sisters during a rapping session enticing the spirits of some “dearly departed.” DeAngelo portrays Maggie, and Sue portrays Kate.

Beginning at 1 pm, Michael Keene will sell and sign his recently published book by The History Press: Folklore and Legends of Rochester: The Mystery of Hoodoo Corner & Other Tales. The book includes the story of the Fox Sisters, as well as the anti-Masonic hysteria of the early nineteenth century and the unexplained disappearance of former Mason, Captain Morgan. Keene worked for twenty-five years in the financial services industry as a financial planner. He is also the producer of an award-winning 2008 film Visions, True Stories of Spiritualism, Secret Societies & Murder, which, in part, inspired his new book.

Copies of Town of Smithfield historian Donna Burdick’s paper “Spirited Women – and Men & Their Unpopular Causes” will be on sale at the Peterboro Mercantile for the benefit of the Peterboro Area Historical Society. Burdick’s document describes Spiritualism as it was introduced and “practiced” in Peterboro. Burdick refers to written accounts of medium sessions and spiritualism conferences.

The Gerrit Smith Estate and the National Abolition Hall of Fame and Museum in Peterboro are open from 1 – 5 p.m. on Saturdays and Sundays until October 23, 2011. Admission to each site is two dollars. Stewards and students are free. For more information: 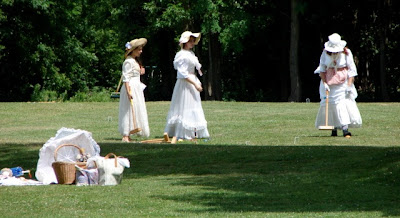 Abolitionist Gerrit Smith liked to play croquet daily during the summer. In honor of Smith’s summer recreation, the Grounds Squad of the Gerrit Smith Estate National Historic Landmark plans to hold its second Family Day of Croquet on Sunday, July 17 from 2 – 6 p.m. on the grounds of Smith’s 19th Century home. The event will be attended by local croquet enthusiasts and a group dressed in croquet outfits. Croquet can be played by amateurs of all ages, and is enjoying a national resurgence. The public is urged to join in reviving this tradition. Croquet attire of the 19th – 21st Century or all white outfits are encouraged but not required.

During the afternoon, croquet courts and equipment will be available. Three buildings on the Gerrit Smith Estate with Heritage New York State Underground Railroad exhibits and the Peterboro Mercantile will be open. The National Abolition Hall of Fame and Museum will also be open from 1 – 5 p.m. The daily court fee is $2 per person. Gerrit Smith Estate tours cost $2 per person. Ice cream, beverages a 50-50 raffle, boxed lunches and baked goods will also be for sale.

Proceeds from the event support the preservation and promotion of the Gerrit Smith Estate National Historic Landmark which is a site on both the New York State Underground Railroad Heritage Trail and the National Park Service Network to Freedom. Family Day of Croquet is one of a series of programs provided by the Stewards for the Gerrit Smith Estate National Historic Landmark during 2011 and partially supported by a PACE grant from the Central New York Community Foundation. For more information on the croquet event contact Lisa Louisa Bryant at 917-578-9674 or at lisalouisabryant@yahoo.com. For a complete listing of programs, contact www.sca-peterboro.com or mail@sca-peterboro.com 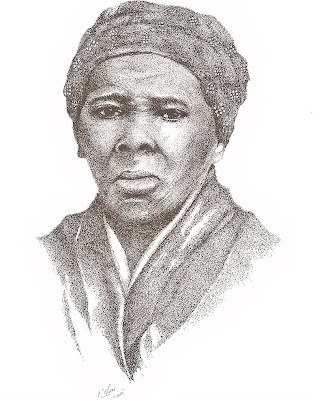 The New York Council for the Humanities Speakers in the Humanities Program will provide two free presentations for the 2011 Peterboro Heritage Summer Programs.

Milton C. Sernett’s illustrated talk tells the story of how a black woman, once enslaved but self-liberated, became the dominant symbol of the Underground Railroad and an inspiration today for American of diverse backgrounds and reform interests. The audience will hear of the exciting findings of the latest research regarding Tubman the historical person, and of the many ways in which her life has been celebrated by writers, artists, and other creative spirits. Dr. Sernett has completed a book on the interplay of myth, memory and history during the years when Tubman was being canonized as an American saint.

On Sunday, July 24, in a talk accompanied by slides, Stuart will describe the Fox Sisters’ rise to national fame as communicators with spirits, the prominent people that followed Spiritualism in the 19th Century, and the history of young and beautiful Maggie Fox after she gave up her mediumship. Rubin will illustrate how 150 years ago the Fox sisters’ introduction of spirit communication swept through American and why it continues to fascinate people today.

These programs are free and open to the public. More information can be found online, by e-mailing mail@sca-peterboro.org or calling 315-280-8828.