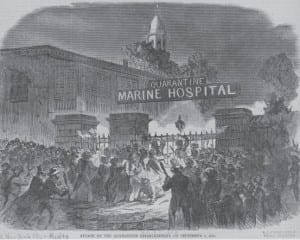 Friends of Abandoned Cemeteries will host the reinterment of the 19th Century Immigrants at Court House (Marine Hospital) Cemetery at Central Avenue and Hyatt Street in Staten Island on April 27th. The event is open to the public by seating is limited.

Between 1799 and 1858, Staten Island was home to the Marine Hospital Quarantine Station. ALL ships entering New York Harbor during those years were stopped and if New York medical inspectors found anyone on the ships suffering from infectious diseases they were removed and held at the Staten Island facility to await their outcome. Local residents from Staten Island, Manhattan and the adjacent communities in New Jersey were also sent to this facility. END_OF_DOCUMENT_TOKEN_TO_BE_REPLACED