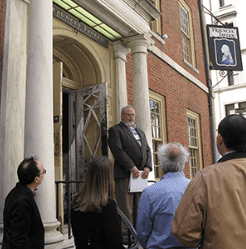 Boston was not the only Colonial city to have its own ‘tea party’ in revolutionary times. Many seaport cities, including New York, had their own rebellions.

Join licensed New York City Tour Guide Fred Cookinham to envision New York’s 1774 waterfront and discover why the city was late in the game to revel in patriotic spirit. END_OF_DOCUMENT_TOKEN_TO_BE_REPLACED 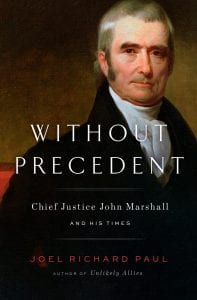 Author Joel Paul is set to give a lecture on John Marshall at the Fraunces Tavern Museum in Manhattan on Thursday, March 8th at 6:30 pm.

“Without Precedent: Chief Justice John Marshall & His Times” will focus on John Marshall, who as chief justice, statesman, and diplomat, played a pivotal role in the founding of the United States. END_OF_DOCUMENT_TOKEN_TO_BE_REPLACED 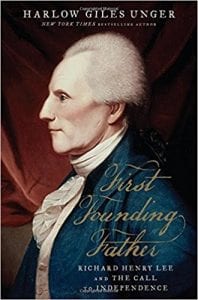 The Fraunces Tavern Museum in New York City has announced a lecture on the First Founding Father: Richard Henry Lee and the Call to Independence has been set for Thursday, February 22 at 6:30 pm.

Harlow Giles Unger will describe the life and career of Richard Henry Lee, the first Founding Father to call for American Independence from Britain. Unger will show how Lee masterminded the political and diplomatic victories that ensured Washington’s military victory. END_OF_DOCUMENT_TOKEN_TO_BE_REPLACED 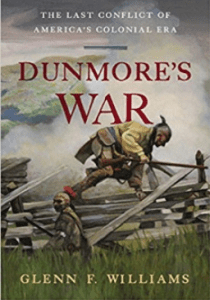 The Fraunces Tavern Museum in New York City will host a lecture on Dunmore’s War, presented by Glenn Williams, in their Flag Gallery on Thursday, December 7th at 6:30 pm.

Glenn Williams will talk about the causes, course, and conduct of the last Native American war before the American War for Independence.

This presentation will challenge many of the misconceptions and myths surrounding the 1774 conflict in which Lord Dunmore, Virginia’s last royal governor, led the colony’s forces in a defensive war against a Native American coalition led by the Shawnee Nation.  END_OF_DOCUMENT_TOKEN_TO_BE_REPLACED

On November 25, 1783, George Washington marched down Broadway in New York City retaking the last British stronghold in the United States. By prearrangement, the British and their many Tory supporters were to leave the City by 12 pm. The American flag was to be raised at the flagpole at the north end of what is today Bowling Green park, officially ending the American Revolution. There was, however, one minor snag. When the American advance guard sought to put up the 13-star American flag, they discovered the British had greased the pole, so that the British flag could not be brought down. Washington said he would not enter the lower part of the City until the American flag was flying. A young sailor John Van Arsdale then bought cleats from a local hardware store and shimmied up the flagpole to raise the American flag, and Washington’s triumphant march to Lower Manhattan continued. END_OF_DOCUMENT_TOKEN_TO_BE_REPLACED 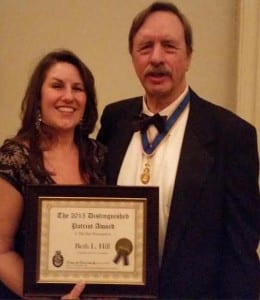 Beth L Hill, President and CEO of the Fort Ticonderoga Association, has been named the 2015 Distinguished Patriot by the Sons of the Revolution in the State of New York. The award was presented to Hill for her years of service in the historical profession and her strong leadership at Fort Ticonderoga.

END_OF_DOCUMENT_TOKEN_TO_BE_REPLACED 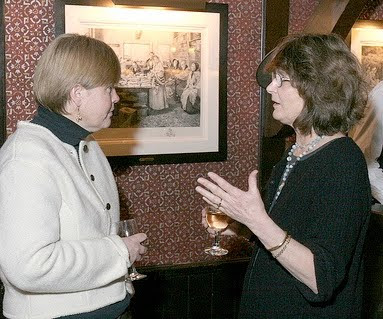 George R. Hearst III, chair of the Board of Trustees of the Albany Institute of History & Art, announced Tuesday that he has accepted the resignation of Christine M. Miles, who has served as the Institute’s executive director since 1986.

Citing a personal decision to explore new challenges, Miles tendered her resignation at an executive session of the board, held following its regular meeting on Monday, January 24.

“It is with mixed emotions that the board has accepted Chris Miles’ resignation as director of the Albany Institute,” Hearst said in making the announcement. “Chris’s contribution to the arts in the Capital District cannot be overstated. Not only has the Albany Institute enriched, educated, and stimulated our region under her expert direction, the arts community as a whole has benefited immeasurably from her skill, dedication, and experience.”

Throughout her tenure, Hearst noted, Miles has guided the Albany Institute, the oldest museum in New York State, through numerous advancements and challenges. Her long-range and strategic planning has brought the museum into its fourth century of service, Hearst said, and, especially in recent years, through some of the most difficult times the arts have ever faced.

“For almost 25 years, her vision has established the Albany Institute as one of New York’s most respected and distinguished institutions,” Hearst said. “We will continue to depend on Chris’s dynamic and insightful stewardship as we prepare to enter a new and exciting phase for the museum.”

Miles says her decision to resign as executive director of the Albany Institute was one of the most difficult she has made in her career.

”Obviously, this is not a decision that is made lightly,” she said. “The Albany Institute has been the center of my professional career for a major portion of my life. And, like so many other museums and arts institutions, it currently faces substantial financial challenges. However, I believe that the foundation we have worked to build here will help sustain this magnificent institution as it continues to meet these challenges. I look forward to assisting the board and staff in this time of transition.”

During Miles’s term as executive director, in 1994, the Institute commenced a major capital campaign to fund a $20 million renovation project that added new buildings and state-of-the-art collections storage facilities, and substantially enhanced the museum’s educational, administrative, and exhibition spaces. The Institute broke ground on the project in 1998 and was closed from 1999 to 2001, when it reopened its new spaces to the public during a Grand Opening Gala.

Miles was also instrumental in helping the Institute gain a number of major grants and awards, according to museum officials, including a $250,000 New Audiences for the Year 2000 Award from the New York State Council on the Arts; a $500,000 National Endowment for the Humanities (NEH) Challenge, which enabled the museum to build its first true endowment; a $750,000 NEH Preservation and Access grant to aid in re-cataloging the collection, improving intellectual accessibility, and funding completion of the new collections facility; more than $750,000 raised over four years to fund the recent Hudson River Panorama exhibition, launched in conjunction with the statewide quadricentennial celebration in 2009; and, most recently, a $147,000 Museums for America Grant from the Institute for Museum and Library Services to fund a website redevelopment project entitled, Digital Renaissance.

Under her direction, the museum has expanded its outreach to include classrooms and students in 26 states and 42 New York counties. Educational offerings have grown to include home school programs, weekend Art for All programs, Vacation Art Breaks, and summer programs. A wide range of lectures, gallery talks, demonstrations, and performances are held each year, as well as popular community-wide events such as the Institute’s Free Thanksgiving Weekend and annual Museum Gala.

Additional accomplishments include overseeing publication of the Institute’s first book documenting its collections, 200 Years of Collecting (Hudson Hills Press, 1998); and the mounting of numerous nationally and internationally recognized exhibitions, including Thomas Cole: Drawn to Nature (1993); Matters of Taste: Food and Drink in Seventeenth-Century Dutch Art and Life (2002); the 350th Anniversary Celebration of the Founding of Albany (2002); Rodin: A Magnificent Obsession (2005); Excavating Egypt (2006), and Hudson River Panorama: 400 Years of History, Art, and Culture (2009).

In 2008, the Albany Roundtable selected Miles to receive its prestigious Good Patroon Award for her commitment to making the museum a broadly accessible cultural and educational resource. Established in 1988, the annual award recognizes outstanding contributions to the community by institutions and individuals. In 1996, she received the Women of Excellence Award from the Albany-Colonie Chamber of Commerce.

“Christine is starting a new chapter in her life,” Hearst said. “We are proud and thankful for the outstanding work she has done to make the Albany Institute of History & Art such a vital and vibrant part of our community, and the board wishes her every success in her future endeavors.”

Hearst said that the Albany Institute Board of Trustees will establish a recruitment committee to begin a national search to replace Miles, who will remain as executive director to oversee the transition during the course of 2011.