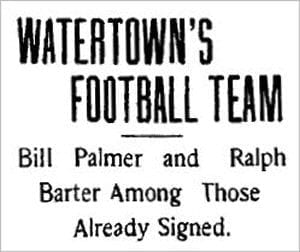 Born in 1875 to William and Catherine Palmer on a Fort Covington farm in northern Franklin County, New York, Bill displayed unusual athletic ability at a young age. At fairs, Fourth of July celebrations, and Field Days, his name was always prominent among those participating in sporting events. END_OF_DOCUMENT_TOKEN_TO_BE_REPLACED