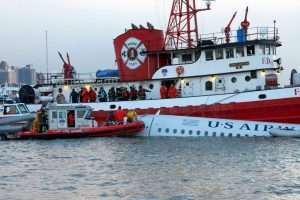 Members of The Fireboat McKean Preservation Project organization have announced that the retired Fire Department of New York Marine Co. 1, the John D. McKean fireboat, will be open for public tours in-conjunction with the upcoming 9/11 20th anniversary events.

Over the course of 50 plus years, the McKean served on New York’s waterfronts. The fireboat participated in notable events such as the Staten Island Ferry Terminal Fire in 1991; the 9/11 WTC terrorist attacks; and the US Airways Flight 1549 crash landing in January 2009 dubbed the “Miracle on the Hudson.” END_OF_DOCUMENT_TOKEN_TO_BE_REPLACED