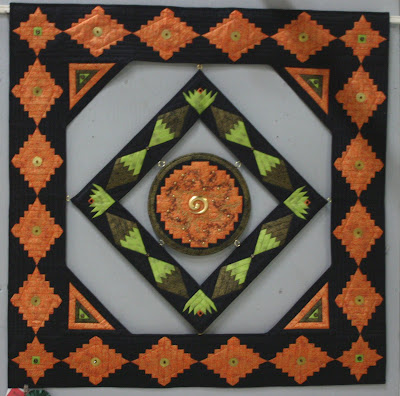 The 25th Annual Northeast Quilts Unlimited seeks entries. The Exhibition will be held at the Arts Center/Old Forge’s new building October 8 to November 30, 2011. Cash prizes will be awarded in several divisions including bed, wall, Art/Innovative, traditional quilt, Adirondack theme, and popular vote. The Northeast Quilts Unlimited is an open show; all quilts entered will be displayed, and judged for awards.

This year’s National Quilting Association Certified Judge is Molly Waddell. The deadline to enter the exhibition is August 27. The fee to enter is $10/$8 members per quilt, with a maximum of 2 entries per quilter.

For more information and entry forms visit www.ArtsCenterOldForge.org, or call the Arts Center at 315-369-6411.

It’s “a once-in-200-years” opportunity. The Seaway Trail Foundation is asking quilters and non-quilters, to make quilts with War of 1812-era colors and patterns for the Great Lakes Seaway Trail 2012 War of 1812 Bicentennial Quilt Show and Challenge event.

Organizers are reaching out to American history enthusiasts and re-enactors, children and people of all ages from the U.S., Canada, United Kingdom, Native nations, and internationally to enter and attend the commemorative event to be held March 17-18, 2012 at the Great Lakes Seaway Trail Discovery Center in the War of 1812 heritage community of Sackets Harbor, New York.


Guidelines for making “cot to coffin”-size (30 inches x 70 inches) quilt using a variety of fabrics, including cotton, linen, silk, wool and linsey-woolsey, and patterns common to the 1812 period are online. Entries must be committed to the show by January 15, 2012; quilts must be completed by March 3, 2012.

Brackman of Lawrence, Kansas, suggests that a quilt in medallion or strip format would be a good patchwork design for the historical era. Brackman says, “Patterns that were popular during the 1812 time were simple stars and basic nine-patch and four-patch variations. The War cut into fabric imports into America but well-to-do women already had stashes of imported French, English and Indian chintzes and calicoes in a variety of colors, and loved to mix large-scale and small-scale prints. For those thinking of using fabric reflecting the domestic prints of the time, indigo blues, browns and a touch of pink would be among the best colors.”

Brackman has designed a reproduction collection of prints from the era for Moda Fabrics; the “Lately Arrived from London” collection should be available in quilt shops by the end of the summer of 2011.

The Seaway Trail Foundation is sponsoring the event as part of a host of War of 1812 Bicentennial commemorative plans for tourism, cultural heritage and military history programs in 2011-2014. The March 2012 show will be the kickoff for a 2011-2014 traveling educational exhibit of the War of 1812-like quilts.

Illustration: War of 1812 attack on Oswego from the Paul Lear collection. 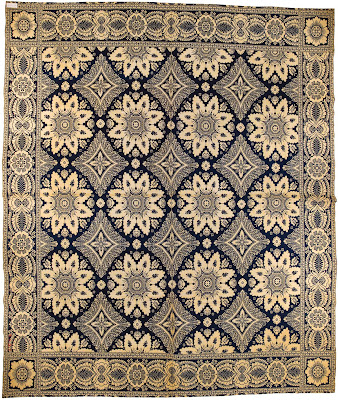 Rabbit Goody, a leading expert in the study and manufacture of 18th and 19th century textiles, will be featured at a panel discussion at the Samuel Dorsky Museum of Art in New Paltz on Sunday, February 20th at 3pm.

The panel discussion is coincides with the exhibit currently on view at the Dorsky: Binary Visions: 19th Century Woven Coverlets from the Collection of Historic Huguenot Street. This exhibit features more than 20 coverlets woven from cotton and wool on water-powered looms in small factories across the mid-Hudson Valley during the first half of the 19th century. The exhibition is a particularly important opportunity for historians and scholars to conceive new ways of thinking about the visual power of these coverlets.

Joining Goody on the panel will be Leslie LeFevre-Stratton, Curator of Collections at Historic Huguenot Street and Jessica Poser, Assistant Professor of Art Education at SUNY New Paltz. Poser has used the textile collections at Historic Huguenot Street as the inspiration for some of her most recent works of art. The panel will be moderated by Brian Wallace, Curator at the Dorsky Museum.

The panel discussion will be held in the Student Union Building closest to the campus entrance off South Manheim Boulevard and is free and open to the public.

For more information about the exhibit and the panel discussion, visit www.huguenotstreet.org or www.newpaltz.edu/museum. 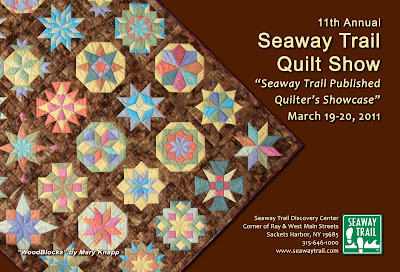 The Seaway Trail Foundation has announced that the works of following featured quilters will be on exhibit at the 2011 Great Lakes Seaway Trail Quilt Show:

Judy Allen of Watertown, NY, is the author of The Art of Feather Quilting with more than 100 pattern choices using graceful curved crosshatching.

Mary Knapp of Watertown, NY, is the designer of the Great Lakes Seaway Trail Lighthouse patterns and has had her award-winning quilts featured in Quilters Newsletter Magazine.

Nancy Murty of Bee Creative Studio in Palmyra, NY, is a quilter-artist-author and fabric designer blending the contemporary with the traditional. Her quilt of her grandfather is on the cover of 500 Art Quilts.

Three of the featured quilters will also speak at the March 19-20, 2011 Great Lakes Seaway Trail Quilt Show that includes demonstrators, and vendors in the nine rooms of the three-story historic former Union Hotel (1817) that now houses the Seaway Trail Discovery Center. The building is accessible and has an elevator.

Show admission is $5 for the two days and includes speakers’ presentations on both days; those with active or retired military ID receive $1 off admission.

In the spirit of traditional Eastern Woodland Native American culture, Jerry and Cheryl Schenandoah will be at the Iroquois Museum with their custom handmade Native American deerskin clothing, arts and crafts on December 9 – 12, 2010. On-site deerskin demonstrations will take place each day noon through 5:00pm. END_OF_DOCUMENT_TOKEN_TO_BE_REPLACED 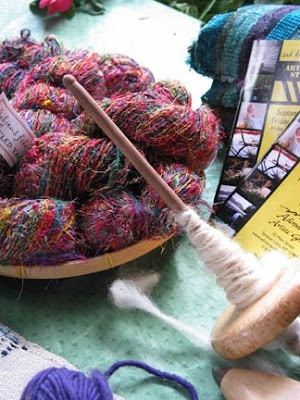 Talented artisans will make this year’s Adirondack Fabric and Fiber Arts Festival at the Adirondack Museum the premier needlework event of the season. The festival will be held on Saturday, September 25, 2010. Activities are planned from 10:00 a.m. to 4:00 p.m. All are included in the price of general museum admission.

The festival will include demonstrations of rug hooking, quilting, felting, spinning, and weaving, a regional quilt show, textile appraisals, an artisan marketplace, a “knit-in” for a good warm cause, hands-on activities, and the museum’s beautiful exhibit, “Common Threads: 150 Years of Adirondack Quilts and Comforters.”

Demonstrations will be held from 10:00 a.m. until 4:00 p.m. at locations throughout the museum campus. Returning participants include the Serendipity Spinners, members of the community-based needlework group Northern Needles, the Adirondack Regional Textile Artist’s Association, as well as felter Sandi Cirillo and mixed-media quilter Louisa Austin Woodworth.

Liz Alpert Fay will make her first appearance at the festival, demonstrating the art of rug hooking. Fay studied at Philadelphia College of Art, and then participated in the Program in Artisanry at Boston University, where she received a BAA in Textile Design in 1981.

Fay created art quilts for seventeen years, exhibiting nationally and in Japan. Her work was exhibited in shows such as “Quilt National” and at the American Craft Museum in New York City. In 1998 she became intrigued with the technique of traditional rug hooking. Since then she has created colorful hand hooked rugs of her own design. The rugs have been purchased for private collections, and many have been selected for juried shows and invitational museum exhibitions. In 2002, Fay’s rugs were featured in the October issue of Country Living magazine; in 2005 she was filmed in her studio and her rugs featured on HGTV (the Home and Garden Channel).

Thistle Hill Weavers, Cherry Valley, N.Y. will offer a weaving demonstration from 1:00 p.m. to 4:00 p.m. The company is a commercial weaving mill that produces reproduction historic textiles for museums, designers, private homeowners, and the film industry. Textiles created by Thistle Hill have appeared in more than thirty major motion pictures. The business was founded by Rabbit Goody, who is also the owner and current director. For more about Thistle Hill Weavers, visit www.rabbitgoody.com.

Museum visitors can learn more about personal antique and collectible fabrics with Ms. Goody who is a textile appraiser and historian. For a small donation to the Adirondack Museum, she will examine vintage textiles and evaluate them for historical importance and value. Appraisals will be held in Visitor Center from 9:30 a.m. until 12:00 noon.

The second annual “Great Adirondack Quilt Show” will feature a display of nearly three-dozen quilts inspired by or used in the Adirondack Mountains.

A presentation, “Knitting in the North Country: History and Folklore,” will be offered by Hallie Bond and Jill Breit at 1:00 and 3:00 p.m. in the museum’s Auditorium. Bond, a museum curator and novice knitter, will share her ongoing research about the place of spinning and knitting in local history including traditional techniques and the wearing of knitted garments. Breit, Executive Director of Traditional Arts in Upstate New York and a superb knitter, will discuss the vital and vibrant knitting scene in
the North Country today.

A special knit-in, “Warm Up America!” will create afghans that will be donated to Hamilton County Community action, an organization that helps people help themselves and others. The knit-in will be held in the Visitor Center from 11:00 a.m. until 4:00 p.m. Participants will knit or crochet 7″ by 9″ rectangles that will be joined together to make cozy afghans.

A dozen regional artisans will sell handmade fabrics and fiber specialty items in a day-long marketplace as part of the Adirondack Fabric and Fiber Arts Festival.

The Adirondack Museum tells stories of the people – past and present — who have lived, worked, and played in the unique place that is the Adirondack Park. History is in our nature. The museum is supported in part by public funds from the New York State Council on the Arts, a State Agency. For information about all that the museum has to offer, call (518) 352-7311, or visit www.adirondackmuseum.org. 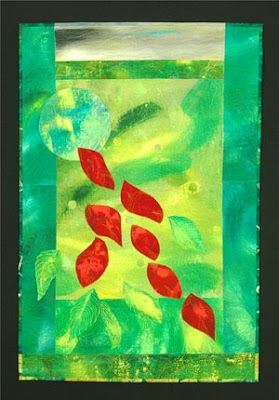 The Second Annual Great Adirondack Quilt Show will be held at the Adirondack Museum, Blue Mountain Lake, New York on Saturday, September 25, 2010. Nearly fifty contemporary quilts will be displayed in the museum’s Roads and Rails building from 10:00 a.m. until 5:00 p.m. The show is part of the Adirondack Fabric and Fiber Arts Festival and is included in the price of general museum admission.

All of the quilts and wall hangings in the show were made after 1970; the natural beauty of the Adirondack region has inspired the design of each. This is truly an Adirondack quilt show. Communities from Piseco to Dickinson Center, Diamond Point to Watertown, N.Y., and many towns in between are represented.

The show will include quilts made from published designs (three from one book alone), original compositions, those that are quilted by hand and others by machine, a few tied comforters, and wall hangings constructed using modern layered fabric techniques.

There are a profusion of appliquéd animals – bear and moose predominating! Visitors should look for the “red work” embroidered piece, the round quilt, and the wall hanging made from forty-two rhomboid-shaped “mini” quilts.

Some of the makers featured are truly “quilt artists” with resumes listing the prestigious shows that they have done, and others are Grandmas who have lovingly fashioned special quilts for their grandchildren.

In addition, there will be a mini-exhibit of the textile production of five generations of the Flachbarth family of Chestertown, N.Y. From an 1877 sampler made in Czechoslovakia by Julia Michler Flachbarth to a contemporary quilt representing Yankee Stadium, the exhibit is a fascinating tour of textile history as interpreted by a single family.

Museum curator Hallie E. Bond has organized the Great Adirondack Quilt Show. Bond also curated the exhibit “Common Threads: 150 Years of Adirondack Quilts and Comforters” which will be on display at the Adirondack Museum through October 2011.

The Adirondack Museum tells stories of the people – past and present — who have lived, worked, and played in the unique place that is the Adirondack Park. History is in our nature. The museum is supported in part by public funds from the New York State Council on the Arts, a State Agency. For information about all that the museum has to offer, call (518) 352-7311, or visit www.adirondackmuseum.org.

Photo: “Late Summer” by Joanna Monroe is one of the entries in the 2010 Great Adirondack Quilt Show.