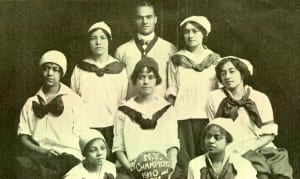 In Spring 2014, the New-York Historical Society will present a range of exhibitions that will examine New York City architecture, fashion and photography through the lens of the legendary Bill Cunningham; the early history of African American basketball before the dawn of the National Basketball Association; the second installment of Audubon’s Aviary, showcasing New-York Historical’s collection of Audubon watercolors; and an exhibition of quilts and textiles created during the Civil War. END_OF_DOCUMENT_TOKEN_TO_BE_REPLACED 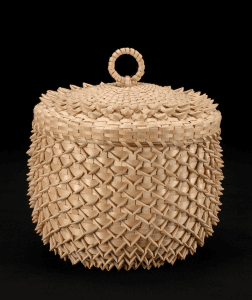 The Fenimore Art Museum in Cooperstown, New York, presents Plain and Fancy: Native American Splint Baskets, an exhibition of baskets spanning two centuries. The art of ash splint basketry is a beautiful synthesis of form and function. The exhibition opens Saturday, August 10, and runs through December 29, 2013.

The exhibition includes over 30 baskets from the 1800s to the present day. Ash splint basketry ranges in form and decoration from practical storage and market baskets to fanciful and exquisitely designed artworks. Basket makers incorporate numerous design elements, such as a variety of weaves: checker, wicker, twill, and hexagonal plaiting. Artists also use sweetgrass and curled splints to embellish their baskets. Other design elements include dyes, stains, and paint. Domes, triangles, dots, or leaves are hand-painted or stamped with a carved potato, turnip, cork, or piece of wood. END_OF_DOCUMENT_TOKEN_TO_BE_REPLACED 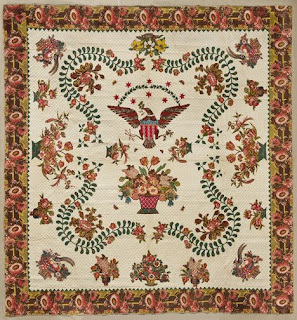 An exhibition of some thirty-five exceptional American and European quilt masterpieces from the Brooklyn Museum’s renowned decorative arts holdings will examine the impact of feminist scholarship on the ways in which historical quilts have been and are currently viewed, contextualized, and interpreted.

Only one of these rare quilts has been on public display in the past thirty years. “Workt by Hand”: Hidden Labor and Historical Quilts will be on view in the Elizabeth A. Sackler Center for Feminist Art from March 15 through September 15, 2013. END_OF_DOCUMENT_TOKEN_TO_BE_REPLACED 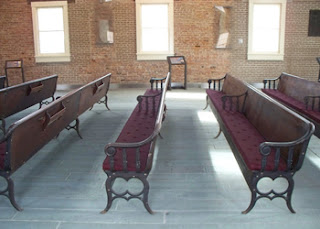 Women’s Rights National Historical Park Superintendent Tammy Duchesne has announced that replacement cushions for the “recycled pews” in the Wesleyan Chapel have been installed. “We are pleased with the new cushions. When we installed the wooden pews in July, we had plans to finish them with cushions so they would resemble the originals,” said Duchesne. END_OF_DOCUMENT_TOKEN_TO_BE_REPLACED 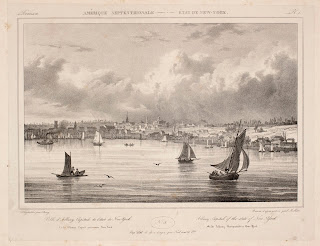 Beginning this month the Albany Institute of History & Art will launch a new monthly lecture series entitled Making It American. The series will take a broad look at what art and material culture can teach us about the development of American history, culture, the arts, politics, and our identity as a nation.

In this series, invited scholars will analyze American values and ideals to enhance our experience and understanding of our world. A painting or school of painters, or a spinning wheel or farm kitchen tools will serve as touchstones for the series. END_OF_DOCUMENT_TOKEN_TO_BE_REPLACED 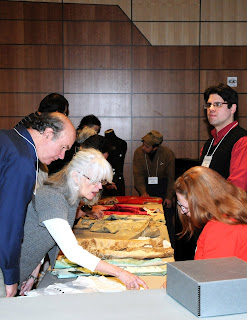 Fort Ticonderoga will host its Third Annual “Material Matters: It’s in the Details” the weekend of January 26 and 27, 2013. This weekend event focuses on the material culture of the 18th century and is intended for collectors, re-enactors, and people with a general interest in learning more about objects of the 18th century and what they can tell us about history. “Material Matters” takes place in the Deborah Clarke Mars Education Center at Fort Ticonderoga and is open by pre-registration only. END_OF_DOCUMENT_TOKEN_TO_BE_REPLACED 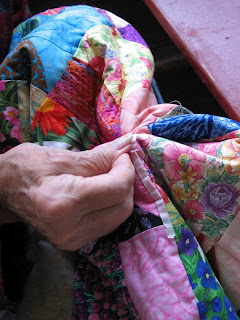 Demonstrations throughout the weekend include: quilting with the Adirondack Regional Textile Artists association, mixed media with Louisa Woodworth and Julie Branch, recycled fiber items with Maria Wulf, Northern Needles quilting demonstration and displays, and wool arts demonstrations with The Serendipity Spinners. Aaron Bush, Jane Mackintosh, and Carol Wilson demonstrate a variety of knitting techniques and will also lead a knit-in for visitors who bring a project.

A special display, “Upcycling Fabric: Ideas from the Past” provides a chance for visitors to talk with Curator Hallie Bond and discover the frugality and creativity of our forebears.

Singer and songwriter, Peggy Lynn, will provide music throughout the day. 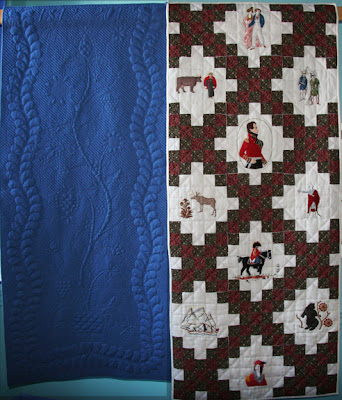 A regiment of Canadian quilters and a Pennsylvania woman have won Viewer’s Choice honors from the Great Lakes Seaway Trail War of 1812 Bicentennial Quilt Show. The show featured 1812 period-correct and pictorial quilts from 18 U.S. states and from across Canada.

The favorite quilt of the more than 1,000 visitors to the show hosted by three early 19th century historic sites in Sackets Harbor, a New York State 1812 Heritage Community, was made by nine of the living history interpreters at Upper Canada Village, Morrisburg, Ontario.

“British Major Sir Isaac Brock is front and center. Lieutenant General Sir George Prevost is aside as he navigates his horse home in shame for not advancing his troops at Plattsburgh. We have the First Nation’s Confederacy leader Tecumseh and Joseph Brant, the Mohawk Chief who was working with the British to create a nation in the west,” Toonders explains.

The Upper Canada Village quilters also included the sloop “Wolf” that fought in one of the Battles of Sackett’s Harbour. A bear, a moose, a First Nation’s symbol, a British sailor and Laura Secord who notified the British of a U.S. attack are also among the quilt’s storytelling images.

Quilts from four Canadian provinces made up approximately 30 percent of the show’s quilts.

The show’s second Viewer’s Choice winner is the “Underhill Tree of Life Whole-Cloth Quilt” made by Jill C. Meszaros of Cambridge Springs, PA, 25 miles south of Erie and the Great Lakes Seaway Trail Pennsylvania. The all-blue quilt is intricately quilted by hand with a dark blue thread.

Meszaros says, “I chose to create a whole-cloth quilt to honor my family heritage and the history of quilting and our nation. My fourth great-grandfather, Major David Underhill traveled to Huron County, Ohio, in 1810. In 1812 he reacted to the news that the British and Indians were landing only to learn they were really soldiers in Hull’s army. As I quilted, my husband was away and I imagined what it would have been like in 1812 to wait for him to come home.”

Meszaros, a stay-at-home mother of six, fashioned her design after the Clarke Family Quilt in the book “Massachusetts Quilts” and used fruit, floral and foliate motifs inspired by “Quilts-Masterworks from the American Folk Art Museum.” The quilt’s batting is wool, typical of the 1812 time. She says, “The last stitch went in the I day I shipped the quilt to the show.”

Show manager Lynette Lundy-Beck notes, “This show inspired people to learn more about the War of 1812, its battles, the soldiers and their loved ones, and about the quilters’ own families. This show is indeed a storytelling event that interprets the travel themes for the Great Lakes Seaway Trail in many interesting and personal ways, and that is what makes this quilt show unique among quilt shows and tourism showcases.”

Much of the war was fought along the Great Lakes Seaway Trail, a National Scenic Byway in the U.S. The 518-mile leisure driving route parallels the St. Lawrence River, Lake Ontario, Niagara River, and Lake Erie. Quilting is just one of many travel themes for the byway. 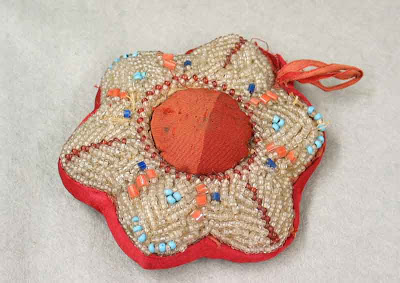 The Adirondack Museum’s fifth 2012 Cabin Fever Sunday series program, “Inventing Fashion: Iroquois Beadwork at the ‘Art of Flowering'” will be held on Sunday, March 18, 2012. The event will be offered free of charge.

In the mid-19th century, New York State officials began to collect Iroquois material culture, intending to preserve remnants of what they saw as a vanishing race. At the same time, Iroquois women were discovering that their beadwork was appealing to the fashionable Victorian women flocking to Niagara Falls and Saratoga Springs on the Grand Tour of America.

This multimedia presentation by Dr. Deborah Holler traces the historic development of Iroquois beadwork and costume, which came to define the public image of “Indian-ness” around the world. Images are drawn from the collections of the Lewis Henry Morgan and Rochester museums, as well as private collections. These images also illuminate the contributions of the Iroquois to the textile arts, as well as the complex cultural exchange that defined the fashions of 19th century New York State.

Dr. Deborah Holler is a Lecturer and Mentor at Empire State College and teaches in Cultural Studies, Literature and the Arts. Her articles and creative writing have been published in regional and national magazines as well as academic journals. She has presented her lectures at national and international conferences, historical societies, and cultural events throughout New York State and is currently working on projects concerning the life and times of 19th century Seneca Caroline G. Parker Mountpleasant.

This program will be held at the Adirondack Lakes Center for the Arts at Blue Mountain Lake, and will begin at 1:30 p.m. For additional information, call (518) 352-7311, ext. 128 or visit www.adirondackmuseum.org.

Photo: Pincushion, typical of souvenir made for tourists by Eastern woodland Indians. From the collection of the Adirondack Museum. 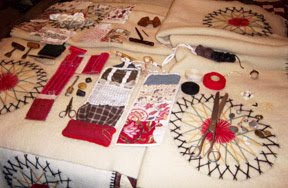 Living history reenactor Ted Schofield of Chaumont, NY, makes his own War of 1812 and Civil War uniforms by hand using period reproduction sewing implements. He says, “I do all hand work now to be more authentic in my interpretation of the 1812 period.”

At the show, Schofeild will be dressed in period costume, selecting from his interpretations of a New York State militiaman, a US naval enlistee or an 1812 civilian. He will be joined by living history interpreters from the Fort La Presentation Association of Ogdensburg, NY; Genesee Country Village and Museum, Mumford, NY; the Sackets Harbor Battlefield Alliance and quilters in early 19th century American and English Regency period dress.

The “cot-to-coffin-sized” quilts coming from 18 U.S. states and Canada will be displayed in three 1812-period historic buildings in Sackets Harbor, NY.

The $5 admission benefits the Seaway Trail Foundation. The show is co-sponsored by Orleans County Tourism and the 22-mile Country Barn Quilt Trail loop off the Great Lakes Seaway Trail to barns painted with quilt block patterns.

Quilting is a cultural heritage tourism theme for traveling the 518-mile-long Great Lakes Seaway Trail byway in New York and Pennsylvania. For itineraries and more information, contact Show Manager Lynette Lundy-Beck at 315-646-1000 x203 or visit the web at www.seawaytrail.com/quilting.