Food for Thought programs are a lunch and lecture series which offers visitors a more in-depth understanding of our exhibits and programs. All programs begin at noon on Wednesdays and include lunch ($15 for NYSHA members and $20 for non-members). Registration is required at least three days in advance. Cancellations without advanced warning will be charged. To reserve your spot, please call Karen Wyckoff at (607) 547-1410.

Food for Thought programs at the Fenimore Art Museum:

June 23 In Our Time: The World as Seen by Magnum Photographers

Food for Thought programs at The Farmers’ Museum:

July 14 The History of Thrall Pharmacy

In recognition of Mother’s Day, all mothers and grandmothers will receive free admission to the Fenimore Art Museum and The Farmers’ Museum on Sunday, May 9.

Visitors can start the day at the Fenimore Art Museum by taking in one of the new exhibitions, such as Empire Waists, Bustles and Lace: A Century of New York Fashion – an exciting exhibition of the Museum’s collection of historic dresses. The exhibition includes the oldest known example of a dress with a label, stunning examples of Empire, Romantic and Civil War era dresses and turn-of-the-20th century items. Afterwards, visitors can enjoy lunch on the terrace overlooking Otsego Lake and then stroll across to The Farmers’ Museum to visit the baby lambs and ride on The Empire State Carousel.

About the Fenimore Art Museum

About The Farmers’ Museum

As one of the oldest rural life museums in the country, The Farmers’ Museum in Cooperstown, New York, provides visitors with a unique opportunity to experience 19th-century rural and village life first-hand through authentic demonstrations and interpretative exhibits. The museum, founded in 1943, comprises a Colonial Revival stone barn listed on the National Register for Historic Places, a recreated historic village circa 1845, a late- nineteenth-century Country Fair featuring The Empire State Carousel, and a working farmstead. Through its 19th-century village and farm, the museum preserves important examples of upstate New York architecture, early agricultural tools and equipment, and heritage livestock. The Farmers’ Museum’s outstanding collection of more than 23,000 items encompasses significant historic objects ranging from butter molds to carriages, and hand planes to plows. The museum also presents a broad range of interactive educational programs for school groups, families, and adults that explore and preserve the rich agricultural history of the region. 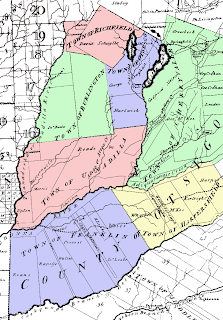 F. Daniel Larkin will discuss the development of the Otsego County region from the late 18th century to the late 20th century at an evening lecture in the auditorium at the Fenimore Art Museum in Cooperstown. The event will take place tomorrow night from 6 to 8 pm; the lecture is free and open to the public.

Larkin’s lecture will cover the expansion and movement of people and goods across the region as well as the rise and decline of agriculture, industrialization, and trade. Dr. Larkin is the Provost and Vice President for Academic Affairs at SUNY College at Oneonta. The lecture is co-sponsored by Hyde Hall and Hanford Mills Museum.

The Fenimore Art Museum, in Cooperstown, reopened for the 2010 season with four new exhibitions on Thursday, April 1. These diverse exhibitions include examples of 19th-century fashion, folk art, photography, and contemporary landscape painting.

Starting this year, admission for children 12 and under is free. This price change will allow more families the opportunity to experience the Museum, its acclaimed exhibitions, and its unique educational programs. Adult admission (13-64) is $12.00 and senior admission (65 and up) is $10.50. NYSHA members, active military, and retired career military are always free.

Empire Waists, Bustles and Lace is an exciting exhibition of the Museum’s collection of historic dresses. When viewed in conjunction with the John Singer Sargent exhibition (opening May 29), the show enables visitors to see and experience a broader historical context of men’s and women’s fashion. Even though upstate New York was considered the edge of the western frontier in the 19th century, residents of the area kept up with New York City and the world in terms of fashion. The exhibition includes the oldest known example of a dress with a label, stunning examples of Empire, Romantic and Civil War era dresses and turn-of-the-20th century items. Additionally, visitors will be able to peek at what was worn underneath the dresses which were vital to giving them their distinctive shapes. This exhibition is funded in part by The Coby Foundation.

In Our Time was organized to celebrate 50 years of photography at Magnum Photos Inc. and the 150th anniversary of the invention of photography.

This exhibition of 150 black-and-white photographs is from a comprehensive survey of Magnum Photos, Inc., which is considered to be one of the world’s most renowned photographic agencies. These images are a result of the extraordinary vision of the many talented photographers who have been associated with Magnum since its founding in 1947.

The broad events captured in these Magnum photographs include the D-Day landing in Normandy, France (1944); prisoners of war returning home to Vienna, Austria (1947); Ghandi’s funeral in India (1948); James Dean in Times Square (1955); Castro delivering a speech in Havanna (1959); Martin Luther King receiving the Nobel Peace Prize (1963); Jacqueline and Robert Kennedy at Arlington (1963); a Shriner’s parade in Boston (1974); women supporters of Ayatollah Khomeni in Iran (1979); and a crack den in New York City (1988).

In Our Time: The World as Seen by Magnum Photographers is toured by George Eastman House International Museum of Photography and Film.

Michele Harvey spends most of the year in her summer studio in upstate New York. Among her various formats, Harvey’s signature triptych formats often include quiet roads or paths framing a central scene that provides one with the sense of simultaneously entering and leaving her misted landscapes. The union of the darker colors of the trees and the distinct light of the vaporous sky create a calming rhythm that draws the viewer into a mysterious world where time appears to stand still.

Harvey is enchanted by the environs of Cooperstown and the opportunity to create works based here. “The lake, its history, the views… all conspired to take me off the beaten path. I felt the lure of Glimmerglass as it must have felt to James Fenimore Cooper. For the first time I became a tourist, humbled by the scenery.”

Watermark: Michele Harvey & Glimmerglass represents a melding of the two; adding her own style to the venerable history of landscape art already created here.

Visitors to the Fenimore Art Museum have long enjoyed the extraordinary collections of fine art, folk art, and American Indian art held by the New York State Historical Association. Less well known are the thousands of historical artifacts in the collections storage areas. Bits of Home acquaints visitors with these historical collections by featuring a selection of more than 30 artifacts from NYSHA and The Farmers’ Museum’s extensive collections of domestic life in nineteenth-century New York.

Opening Later in the Season…

The Fenimore Art Museum presents the first major exhibition on the topic of portraits of women by the well-known American artist John Singer Sargent (1856-1925). The exhibition explores Sargent’s range of styles and depth of characterization in his portraits of society women, as well as his fascination with exotic working-class women of Venice and Capri. The paintings and drawings provide an intimate glimpse into the lives of these women of the late 19th and early 20th centuries. Included will be drawings of Madame Gautreau, the mysterious subject of Sargent’s famous portrait Madame X.

The Coopers of Cooperstown
Cooper Room

American Memory: Recalling the Past in Folk Art
Main Gallery

From April 1 through May 10, the museum will be open Tuesday through Sunday, from 10 am to 4 pm, closed on Mondays. Summer hours begin on May 11 and continue through October 11. During the summer season, the museum is open seven days a week from 10 am to 5 pm. Please visit their website for more information – www.fenimoreartmuseum.org.

Fenimore Art Museum is now accepting submissions for its third annual outdoor, summer event Art By The Lake – formerly called A Taste of the Sublime. It will be held Saturday, August 7, 2010 on the museum’s spacious grounds overlooking Otsego Lake.

Art by the Lake is a juried art invitational that welcomes artists from across New York State in a celebration of the historic relationship between the artists and the landscape that surrounds us. The event features outstanding artists in all genres of landscape art, interactive demonstrations, educational programming, live entertainment, and tastings of some of the best food, wine, and beer from across the state.

Prizes will be awarded in the following categories:
• Best Interpretation of New York Landscape
• Most Outstanding Use of Color
• Most Original Style
• Audience Favorite

An artist’s information packet and application form can be found on the Fenimore Art Museum’s website at FenimoreArtMuseum.org.

Applications must be postmarked by May 3, 2010. (Late applications may be accepted at the discretion of the jury if space is available.) Artists will be notified of their acceptance by May 17, 2010, at which point they will receive detailed event information and an artist’s contract.

Young people will take a walk on the wild side this February as the Fenimore Art Museum presents “Virtual Vacations.” Each day, children (ages 5 to 8) will be transported to faraway places using the Museum’s advanced video conferencing technology. The Museum will connect “live” with professionals from the Life Science Education Center at Marian College and The Toledo Zoo for entertaining and educational programs focusing on various types of animals. After each lesson, children will participate in a hands-on activity based on the theme of the virtual visit. Each “Virtual Vacation” will feature two live animals via video conferencing.

Tuesday, February 16 – Catch Me If You Can: Why do some animals have scales, stripes, stingers, or spines? Join the Life Science Education Center at Marian College to explore how some of nature’s most amazing creatures protect themselves. We’ll even see some of the animals!

Wednesday, February 17 – Desert Dwellers: The Toledo Zoo takes participants to the desert! We’ll learn what a desert is and explore some of the fascinating animals that live there. Discover how living things have adapted to the arid conditions and temperature swings.

Thursday, February 18 – Animal Coverings: Join the Toledo Zoo and play a game to discover how animal groups are formed using similarities and differences. Live animals will help us learn the differences between the 5 classes of vertebrates: fish, birds, mammals, reptiles and amphibians.