The 41st Annual Empire State Winter Games, originally scheduled for January 28 – 31, 2021, have been cancelled due to the COVID-19 pandemic. END_OF_DOCUMENT_TOKEN_TO_BE_REPLACED 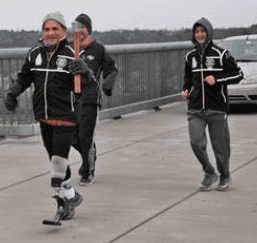 A lifelong Poughkeepsie resident and a volunteer Ambassador at the Walkway, Vacca will is planning to compete in the biathlon at this year’s Empire State Games, which is being held Feb. 1-4 in Lake Placid. Vacca was joined on his run by Clayton DeClemente, an 18-year-old LaGrange resident who will be competing in the speedskating event at the Games. After a brief ceremony at the Park’s Center Observation Area, the torch was passed to Ulster County’s Nicholas Metz and Kev Marlow, who carried it along the Hudson Valley Rail Trail. END_OF_DOCUMENT_TOKEN_TO_BE_REPLACED