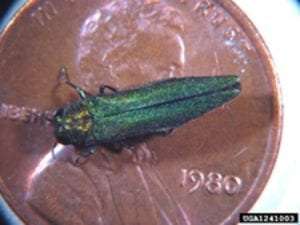 While not unexpected given the EAB’s spread, this marks the first confirmed case of EAB within the Adirondack Park. The affected trees were identified by Department of Transportation personnel at the Warren County Canoe Launch on the Schroon River in the town of Chester. A sample has been sent to Cornell University Insect Diagnostic Lab for further review. END_OF_DOCUMENT_TOKEN_TO_BE_REPLACED