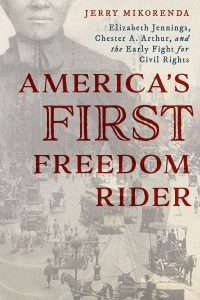 By the 1850s, the horse-drawn streetcars on rails had become a more common mode of transportation, competing with the increasingly obsolete enclosed horse-drawn omnibuses in the city of New York. The streetcars regularly barred access to their service on the basis of race and owners and drivers easily refused service to passengers of African descent and omnibuses became the default mode for people of color.

On Sunday, July 16, 1854, Elizabeth Jennings boarded a streetcar of the Third Avenue Railroad Company at the corner of Pearl and Chatham Streets in Manhattan on her way to the First Colored Congregational Church, where she was an organist. The conductor ordered her off, instructing her to take a omnibus. When she refused, the conductor, with the help of a New York police officer, removed her by force. END_OF_DOCUMENT_TOKEN_TO_BE_REPLACED