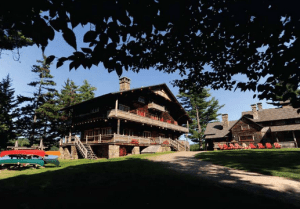 During the late 19th century, the region became a mecca for sportsmen and other people seeking recreation and revitalization in the wild places of the region. In response to this, native builders and professional architects developed a rustic style of architecture that is best represented by a series of building complexes known as Great Camps. END_OF_DOCUMENT_TOKEN_TO_BE_REPLACED 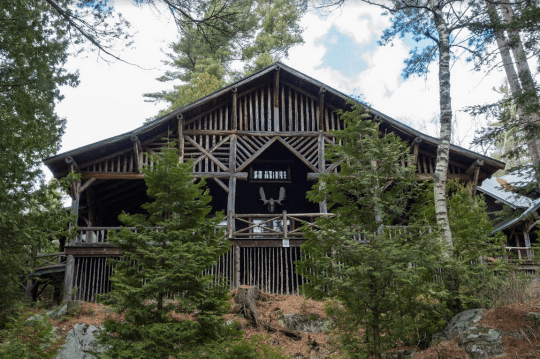 Eagle Island Camp is a Great Camp designed by architect William Coulter that contains some of his most notable rustic work. The 30-acre island is located below Upper Saranac Lake’s narrows east of Gilpin Bay. The camp was built in 1903 for Levi P. Morton, U.S. Vice President under Benjamin Harrison and later Governor of New York. END_OF_DOCUMENT_TOKEN_TO_BE_REPLACED

Eagle Island was designed in 1903 by Adirondack architect William Coulter for Levi P. Morton, the former U.S. Vice President and former Governor of New York. In 1910 the camp was sold to Henry Graves Jr. who donated this Great Camp to the Girl Scout Council of the Oranges, New Jersey in 1937. Designated a National Historic Landmark in 2003, it was operated as a summer Girl Scout Camp for 70 years thru 2008; in 2010 the Girl Scouts put Eagle Island up for sale. END_OF_DOCUMENT_TOKEN_TO_BE_REPLACED