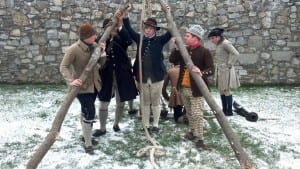 The event will feature a lively program highlighting Henry Knox’s arrival to Fort Ticonderoga and recreate part of the epic feat that ultimately forced the British evacuation from Boston on March 17, 1776. END_OF_DOCUMENT_TOKEN_TO_BE_REPLACED 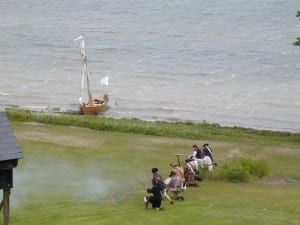 On August 9 and 10, 2014, some exciting mid-1700s military activity will take place at the Chimney Point State Historic Site in Addison, as part of the annual Crown Point, NY, annual French & Indian War Encampment.  At about 10:30 am both days watch for French and British soldier reenactors to cross the Lake Champlain Bridge or travel by reproduction boats, weather permitting, from New York into Vermont.  By 11:00, if conditions allow, they will engage in a military tactical on the lawn and beach south of the Chimney Point tavern building. END_OF_DOCUMENT_TOKEN_TO_BE_REPLACED 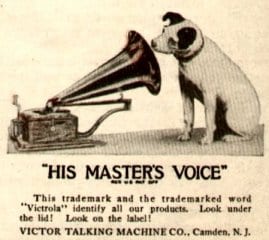 What you see here is one of the most recognizable trademarks ever, a logo that has been used by many companies around the world. The dog in the image is not fictional. His name was Nipper, and a few years after his death, Nipper’s owner sold a modified painting of his dog to a recording company. The rest is history, and part of that history includes a heretofore unknown North Country native.

From humble beginnings, he became famous for his wide-ranging knowledge of recording and his ability to invent. Perhaps most important of all, he traveled the world and was the first person to record the music of a number of countries, saving it for posterity. END_OF_DOCUMENT_TOKEN_TO_BE_REPLACED 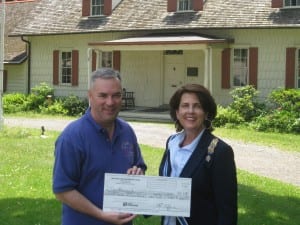 They came to see the point from which Hudson Valley troops, commanded by Generals Richard Montgomery and Philip Schuyler, departed to invade British Canada, and found an opportunity to serve history by funding a bronze marker at the starting point of the so-called Knox Artillery Trail, but not at Ticonderoga – at Crown Point. END_OF_DOCUMENT_TOKEN_TO_BE_REPLACED

If you’ve wanted to learn more about what you see as you walk or drive over the new Lake Champlain Bridge, join the managers of the Chimney Point, VT, and Crown Point, NY, State Historic Sites for a guided walk on Sunday, July 28, 2013, at 1:00 p.m. Tom Hughes and Elsa Gilbertson will leaders a walk across and back on the bridge, and will discuss the 9,000 years of human history at this important location on Lake Champlain.

At this narrow passage on Lake Champlain humans have crossed here, as well as traveled north and south on the lake since glacial waters receded over 9,000 years ago. The channel with its peninsulas, or points, on each side made this one of the most strategic spots on Lake Champlain for the Native Americans, and French, British, and early Americans in the 17th and 18th centuries. END_OF_DOCUMENT_TOKEN_TO_BE_REPLACED 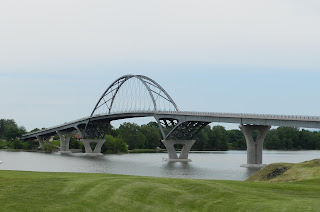 For centuries, this crossing has been used by Woodlands Indians, the French, the British, and Americans. The narrow channel passage for water vessels and the peninsulas, or points, on either side made this one of the most strategic military locations along Lake Champlain, especially during the 1700s.

END_OF_DOCUMENT_TOKEN_TO_BE_REPLACED 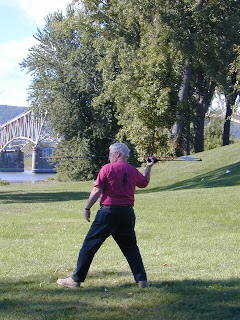 People from all over the northeast begin gathering today at the Chimney Point State Historic Site on Lake Champlain in Addison, Vermont, for this weekend’s annual Open Atlatl Championship. The event is back at Chimney Point after two years at Mount Independence, due to the site’s closure during the Lake Champlain Bridge construction project.

The atlatl is the ancient tool used the world over before the bow and arrow to effectively project darts and spears for hunting. During the bridge project archeology work, a number of projectile points were found here, indicating the atlatl was used historically on the very location of this championship, now in its 17th year. END_OF_DOCUMENT_TOKEN_TO_BE_REPLACED 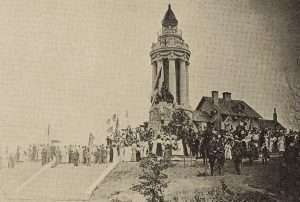 A battle took place (perhaps near the present-day site of the lighthouse), the arquebus firearms used by the three Frenchmen were said to prove decisive, and the Algonquins and French returned northward. END_OF_DOCUMENT_TOKEN_TO_BE_REPLACED 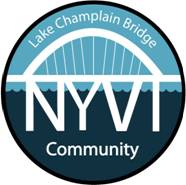 The bridge re-opened to traffic on November 7, 2011, but the celebration was postponed until now.