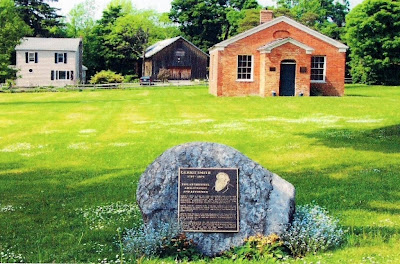 It was an unusual partnership: a runaway slave and a wealthy New York landholder. Gerrit Smith and Frederick Douglass were drawn together by a shared commitment to ending slavery and guaranteeing equal rights for all. Their friendship began tentatively in the late 1840s at about the time Douglass launched his first newspaper, the North Star, in Rochester NY. It solidified in the early 1850s and contributed to Douglass’ acrimonious break with his original abolitionist associates, the followers of Boston editor William Lloyd Garrison. His growing ties to Smith enabled Douglass to leave the narrow ideological orbit of the Garrisonians and join the growing ranks of the northerners pursuing political antislavery tactics.

John R. McKivigan Ph.D. will speak further on his studies of this unique partnership during his keynote address The Gerrit Smith – Frederick Douglass Partnership for the annual dinner of the National Abolition Hall of Fame and Museum on Saturday, October 22, 2011 at the Hall of Presidents at Colgate University in Hamilton NY.

Douglass and Smith were two of the most influential, respected, and powerful abolitionists in our nation. Both reformers were among the first five persons inducted into the National Abolition Hall of Fame and Museum in Peterboro in 2005. McKivigan will focus on the collaborative work of these two famous men.

Dr. McKivigan received his Ph.D. from Ohio State University and is currently a professor of United States History at Indiana University-Purdue University at Indianapolis. McKivigan, a respected scholar of the American anti-slavery movement, was an adjunct member of the History and Afro-American and African Studies Department at Yale University from 1979 to 1989 and series co-editor of The Frederick Douglass Papers 1989 to 1992. Since 1994, McKivigan has been the director of the Frederick Douglass Papers, a documentary editing project supported by the National Endowment for the Humanities and the National Historical Publications and Records Commission. McKivigan co-authored research articles on Gerrit Smith as early as 1983 with such works as The Ambivalent Six, He Stands like Jupiter: The Autobiography of Gerrit Smith, and The ‘Black Dream’ of Gerrit Smith, New York Abolitionist.

The collaborations of Douglass and Smith will be revisited at 10:00 a.m. on Sunday, October 23 at the Gerrit Smith Estate National Historic Landmark and the National Abolition Hall of Fame and Museum in Peterboro when Dr. McKivigan and Dr. Norman K. Dann walk together among the structures and exhibits on abolition and the Underground Railroad further discussing the partnership of the two men and the words and deeds that transpired from their times together in Peterboro over 160 years ago.

C. James Trotman Ph.D. will close the Upstate Institute afternoon symposia at 3:30 p.m. on Saturday, October 22 in Golden Hall at Colgate University with a tribute to Frederick Douglass as the Pioneering Reformer. Dr. Trotman is professor emeritus and the founding director of the Frederick Douglass Institute at West Chester University PA. Dr. Trotman presented for the Hall of Fame commemoration of Douglass in 2006.

The public is encouraged to attend parts or all of the annual National Abolition Hall of Fame and Museum event. For the complete schedule and the registration form: www.AbolitionHoF.org or contact info@abolitionhof.org and 315-366-8101.