All last week Vermont Public Radio (VPR) has been running a series of reported entitled “History Under the Waves” looking at five historic wrecks that lie at the bottom of Lake Champlain. Over 300 shipwrecks lie at the bottom of Champlain, and VPR looked at what sent five of them to their fates, including a Revolutionary War gunboat, a lake schooner, two steamboats, and a sailing canal boat. The reports also feature a photo gallery.

Much of what is known about the extend of underwater remains of Champlain shipwrecks comes from surveys conducted by the Lake Champlain Maritime Museum (LCMM). The LCMM has been instrumental in conducting archeological surveys and persuading New York and Vermont to establish the Lake Champlain Historic Preserve System in order to provide access for divers to some of the Lake’s historic shipwrecks. You can find a list of manning of the Champlain Shipwrecks at the LCMM Shipwrecks site. 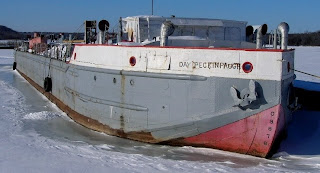 The New York State Museum has received a $3.1 million federal transportation grant to make mechanical upgrades to the Day Peckinpaugh, paving the way for the historic canal boat’s transformation into a permanent floating museum, dedicated to sharing the history and heritage of the state’s canal system.

As the first motorship of its kind specifically designed for the dimensions of the 20th-century Erie Barge Canal, and the last surviving vessel of its kind remaining afloat, the Peckinpaugh has become an iconic fixture on the state’s waterways. Built in 1921 in Duluth, Minnesota to carry grain from the Midwest to New York City, it was the harbinger for nearly a hundred other canal motorships that were seen everywhere on the waterway until 1950. In 1994, the Peckinpaugh made its final commercial voyage, with communities from Rome to Oswego turning out to wave goodbye.

The Peckinpaugh is scheduled to have temporary exhibits installed for the Hudson-Fulton-Champlain quadricentennial celebration tour in August and September. This was organized by the Erie Canal National Heritage Corridor, in conjunction with the State Museum, Saratoga National Historical Park and the New York State Canal Corporation. This new federal grant will provide funds for the rehabilitation work necessary before permanent exhibits can be installed and the Peckinpaugh is ready for continuous tours.

The grant was among more than $81 million in federal funding for 59 transportation projects across New York State, announced by Governor David Paterson. Funds will be allocated through the American Recovery and Reinvestment Act (ARRA) for Transportation Enhancement Program (TEP) projects. TEP finances transportation improvements with cultural, aesthetic, historical and environmental significance. It’s hoped the projects will make necessary improvements to local walkways, bicycle paths and other transportation routes while spurring economic development and job creation.

The value of a waterborne traveling exhibition, dedicated to sharing the history of the canal system, became apparent when more than a million visitors turned out to visit the 1976 Bicentennial Barge, which reached several dozen communities over a five-month journey. It is estimated that as much as 85 percent of the state’s population live in regions within a half-hour drive of the state’s waterway network.

The Peckinpaugh will follow a schedule of visits from New York City to Plattsburgh to Buffalo to Ithaca. When it is not touring during the navigation season it will be available for tours at the historic Matton Shipyard at Peebles Island State Park in Waterford. During the winter season it may also be open at its winter berth on the Waterford Flight.

Plans call for the Peckinpaugh’s permanent exhibitions to be installed and ready for visitors by summer 2010. The National Park Service will coordinate the development and operation of the exhibitions in the 130-foot long open cargo hold of the motorship, which at one time carried 160 tons of dry cement. While maintaining the Peckinpaugh’s industrial character, initial plans call for the creation of a gallery that is nearly as large as some gallery spaces in the State Museum. The gallery will be universally accessible and compliant with the American Disabilities Act..

This grant will help to mitigate a decade of neglect that left many of the boat’s mechanical systems in disrepair when it was largely abandoned in Erie, Pa. between 1995 and 2005. It follows a $290,000 grant in 2006 from the New York State Office of Parks, Recreation and Historic Preservation’s Environmental Protection Fund that has been used to stabilize the Peckinpaugh. Additional work will include the replacement of fuel tanks, ballast piping and valves, the possible addition of a new ballast tank and the rebuilding of fresh water, sanitary and electrical systems. Plans also include some hull plate replacement, repair and painting.