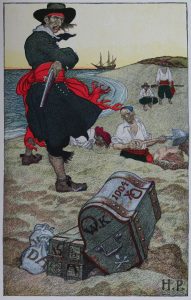 “A canvas of travelers’ accounts, town histories, and other antiquarian sources for the American Northeast documents over forty incidents where groups of rural folk employed occult techniques to seek buried treasure, generally in very unlikely inland locales, and usually during the fifty years between 1780 and 1830. Most episodes involved small parties, handfuls of men bound to share equally in any discoveries. Tradition held that a minimum of three (a particularly magical number that occurs repeatedly in treasure lore) seekers was essential for a successful dig.” END_OF_DOCUMENT_TOKEN_TO_BE_REPLACED