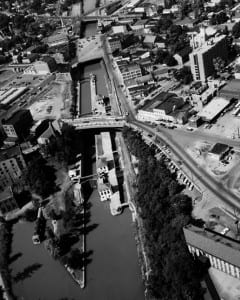 In 1917 New York State found itself with a rather big problem. After fourteen years of planning, engineering and construction, the new Barge Canal was almost ready for use. Although terminal space was still being built, plans were to have the entire canal channel and locks ready for use in the spring of 1918. However, there were few boats available for use on the canal, for a number of reasons: END_OF_DOCUMENT_TOKEN_TO_BE_REPLACED 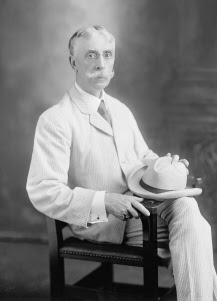 The first 20 years of Keeseville’s Thomas William Symons’ work as an engineer were incredibly successful. A list of his achievements reads like a career review, but he was just getting started. After a second stint in the Northwest, he returned to the east in 1895, charged with planning and designing the river and harbor works at Buffalo. He was named engineer of the 10th Lighthouse District, which included Lakes Erie and Ontario, encompassing all the waterways and lighthouses from Detroit, Michigan, to Ogdensburg, New York.

Among his remarkable projects was “a very exposed, elaborate lighthouse and fog signal” on Lake Erie, near Toledo. Grandest of all, however, was one of Thomas Symons’ signature accomplishments: planning and constructing the world’s longest breakwater (over four miles long). Built along the shores of Buffalo, it was a project that earned him considerable attention. Further improvements he brought to the city enhanced his reputation there.

Another major project talked about for years came to the forefront in the late 1890s—the possibility of a ship canal spanning New York State. The 54th Congress in 1897 commissioned a report, but the results disappointed the powerful committee chairman when Symons’ detailed analysis named a barge canal, not a ship canal, as the best option.

In 1898, New York’s new governor, Teddy Roosevelt, assigned Thomas to personally investigate and report on the state’s waterways, with emphasis on the feasibility of a barge canal to ensure it was the correct option. A concern on the federal level was national security, which was better served by Symons’ plan to run the canal across the state rather than through the St. Lawrence River to Montreal, up Lake Champlain, and down the Hudson to New York City.

Thomas’ route across New York kept the structure entirely with America’s borders. (This and many other projects were requested by the War Department, which explains the security factor.) His additional work for Roosevelt reached the same conclusion, and after extended arguments in Congress, $100 million was appropriated for canal improvements. The decision was affirmation of Thomas’ judgment and the great respect in Congress for his engineering capabilities.

In 1902, the senate noted “the conspicuous services of Major Thomas W. Symons regarding the canal problems in New York,” and that he had “aided materially in its solution.” A senate resolution cited “his able, broad-minded, and public-spirited labors on behalf of the state.”

During the canal discussions, his life had taken an unusual turn. Teddy Roosevelt had won the presidency in 1902, and in early 1903, the decision was made to replace his top military aide. Keeseville’s Thomas Symons was going to the White House.

It was sad news for Buffalo, Thomas’ home for the past eight years. At a sendoff banquet, the praise for him was effusive. Among the acknowledgments was that his work in Buffalo’s harbor had brought millions of dollars of investments and widespread employment to the city. From a business and social perspective, one speaker professed the community’s “unbounded love, affection, and admiration.” The comments were followed by an extended ovation.

For a man of Symons’ stature, some of the new duties in Washington seemed a bit out of place. Officially, he was the officer in charge of Public Buildings and Grounds of the District of Columbia, a position for which he was obviously well suited. (And, the job was accompanied by a pay raise to the level of Colonel of Engineers.)

However, Thomas was also the president’s number one military aide, making him the Master of Ceremonies for all White House functions. Every appearance by Teddy Roosevelt was planned, coordinated, and executed by Symons, his close personal friend. Depending on whom the guests were, Thomas selected the décor, music, food, and entertainment.

He became the public face of all White House events. In reception lines, it was his duty to be at the president’s side. No matter what their stature, he greeted each guest as the line progressed, and in turn introduced each guest to Roosevelt. Everyone had to go through Roosevelt’s right-hand man before meeting the president (though he actually stood to the president’s left).

He also played a vital diplomatic role by mingling with the guests, ensuring all were seated and handled according to their importance, and allowing the President and First Lady to feel as secure as if they had planned each event themselves.

He was also the paymaster general of the White House, seeing to it that all funds appropriated for expenses were spent properly. The media regularly noted that in Teddy Roosevelt’s home, Symons was the most conspicuous person except for the president himself.

With so many responsibilities, the job of top aide to the president seemed impossibly busy, which is why Roosevelt expanded the staff from one to nine aides, all of them placed under the charge of Symons, who could then delegate much of his authority.

The only sense of controversy to arise during Thomas’ career was related to the development of New York’s barge canal, and it had nothing to do with him personally. He was the designer of the proposed system, and many felt it was critical that he stay involved in the project. But the new duties in Washington kept him very busy. Because Congress approved additional engineering employees to work under Symons, some felt it was wrong to allow Thomas to spend some of his time working on the canal project, away from his regular job.

Symons even agreed to forego the higher pay he received from the White House position in order to help with the canal. There was considerable resistance, but Roosevelt himself stepped forward, telling Congress that as governor, he had hired Thomas Symons to closely examine New York’s waterways. Thus, there was no man better suited for overseeing the $100 million expenditure.

The legislators relented, and by authority of a special act of Congress, Symons was allowed to work on the creation of New York’s barge canal system. After Roosevelt’s first term, Thomas left the White House and focused his efforts on the canal work.

In 1908, when the Chief Engineer of the Army Corps was retiring, Symons, by then a full colonel, was among the top candidates for the job. His strongest advocate was President Roosevelt, but after 37 years of service, Thomas submitted his name to the retirement list.

He remained active in the work on New York’s canals, which he monitored closely, and despite suggestions of excessive costs, the project came in well below the original estimates. He also served on the Pennsylvania Canal Commission and continued working and advising on other engineering projects.

His role in the building of America is undeniable, from New York to Washington State; the border with Mexico; the Mississippi River; Washington, D.C.; and so many other places. The world’s longest breakwater (at Buffalo) and New York’s barge canal system stand out as his major career accomplishments. And Roosevelt’s first administration took him to the highest echelons of world power for four years. He shared the president’s gratitude and friendship.

Thomas Symons, trusted aide, the man Teddy Roosevelt called the “Father of Barge Canals,” died in 1920 at the age of 71. In 1943, a Liberty ship built in Portland, Oregon was named the SS Thomas W. Symons in his honor.

Lawrence Gooley has authored 11 books and more than 100 articles on the North Country’s past. He and his partner, Jill McKee, founded Bloated Toe Enterprises in 2004. Expanding their services in 2008, they have produced 24 titles to date, and are now offering web design. For information on book publishing, visit Bloated Toe Publishing.