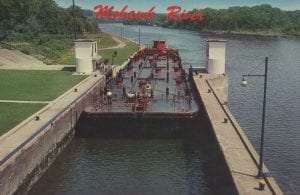 Historian Scott Haefner will discuss Transportation in the Mohawk Valley on November 12th. This presentation will explore the significance of the river valley in developing transportation to the West and covers the Bateaux era in the 18th century through Turnpikes, Canals and Railroads. Haefner is a Registered Public Historian and is the site manager of Old Fort Johnson, operated by the Montgomery County Historical Society. END_OF_DOCUMENT_TOKEN_TO_BE_REPLACED 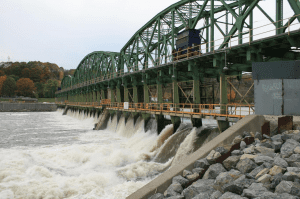 The Mohawk River has been used as a transportation corridor since the beginning of human settlement. Indigenous people used the river to move east and west, as did the first European explorers and those who followed. The river was shallow and relatively slow flowing. Along the 120-miles between Rome and the Hudson river, there are two waterfalls. The largest of the two is near the eastern end of the river, where the water flows over a 90-foot high falls at Cohoes. At Little Falls the river flows over a series of rapids that are 45-feet in height. END_OF_DOCUMENT_TOKEN_TO_BE_REPLACED 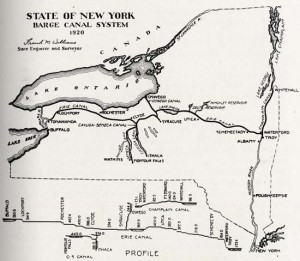 The New York State Barge Canal National Register Historic District spans 450 miles and includes the four branches of the state’s canal system: the Erie, Champlain, Oswego, and Cayuga-Seneca canals– all much enlarged versions of waterways that were initially constructed during the 1820s. The nomination evaluated 791 features and included 552 contributing structures and buildings. END_OF_DOCUMENT_TOKEN_TO_BE_REPLACED