The topic of the latest The History Twins podcast is Peggy Shippen, the wife of American General Benedict Arnold. Storytelling duo Carla and Keyes discuss Shippen’s involvement in the Revolutionary spy plot in which Arnold sold the plans to West Point to British Major John Andre. END_OF_DOCUMENT_TOKEN_TO_BE_REPLACED

The topic of this week’s The History Twins podcast is “Hulda: The Other Legend of Sleepy Hollow”, and storytelling duo Carla and Keyes discuss Hulda of Bohemia, the sharpshooting witch who is said to have saved Sleepy Hollow, New York during the Revolutionary War. END_OF_DOCUMENT_TOKEN_TO_BE_REPLACED

This week is the debut of The History Twins podcast, storytelling duo Carla Lynne Hall and Jim Keyes discuss the creative process behind the stories and music of their historical programs.

This episode explores “This Man’s A Spy!,” Carla and Keyes’ musical retelling of the treasonous plot between American General Benedict Arnold and British Major John Andre during the American Revolutionary War. The two met in Haverstraw, New York to hand over the plans to West Point, and their lives were forever changed. The Arnold and André affair is important, because had their plan succeeded, the British could have won the Revolutionary War. END_OF_DOCUMENT_TOKEN_TO_BE_REPLACED

The new book Taking Sides in Revolutionary New Jersey: Caught in the Crossfire (Rutgers University Press, 2022) by Maxine N. Lurie looks back at the American Revolution in New Jersey, and the residents that took stands that varied from “Loyalist” to “Patriot” to neutral and/or “trimmer” (those who changed sides for a variety of reasons). END_OF_DOCUMENT_TOKEN_TO_BE_REPLACED

Privateers were privately owned vessels, mostly refitted merchant ships, that were granted permission by the new government to seize British merchantmen and men of war. At a time when the young Continental Navy numbered no more than about sixty vessels all told, privateers rushed to fill the gaps. Nearly 2,000 set sail over the course of the war, with tens of thousands of Americans serving on them and capturing some 1,800 British ships. END_OF_DOCUMENT_TOKEN_TO_BE_REPLACED

This week on The Historians Podcast, a highlights podcast with excerpts from six episodes. Topics include: 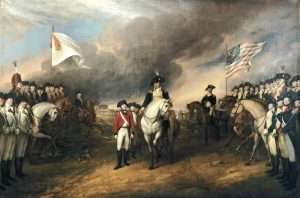 The 9th Annual Conference on the American Revolution has been set for March 18th through 20th, in Williamsburg, Virginia.

This conference features scholars, historians and writers who are well-known to Revolutionary War enthusiasts, public historians and history professors. Speakers have been selected for their depth of knowledge and ability to give an engaging presentation.

All proceeds from book sales will be donated to the Fort Plain Museum and Historical Park by America’s History LLC, the organizers of the conference. END_OF_DOCUMENT_TOKEN_TO_BE_REPLACED

In the first episode of the A New York Minute in History podcast’s 2022 season, Devin Lander and Lauren Roberts look to a William G. Pomeroy Foundation historical roadside marker in Westchester County to learn about American patriot Thomas Paine, his influence on the American and French Revolutions – and just how and why his body went missing.  Guests include Dr. Nora Slonimsky and Dr. Michael Crowder of the Institute for Thomas Paine Studies at Iona College.

The sign is one of hundreds reviewed by New York Almanack founder and editor John Warren in his role as a Pomeroy Foundation Grant Consultant. You can learn how to apply for your own historic sign here. END_OF_DOCUMENT_TOKEN_TO_BE_REPLACED

This week on The Historians Podcast, attorney and historian Jim Kaplan discusses the significance of Evacuation Day and how the day has been commemorated through the years. A print version of this story previously appeared in New York Almanack.

This week on The Historians Podcast, a Highlights Episode. Jim Kaplan on Rich Rescorla’s heroism in the 2001 World Trade Center attack, Bob Cudmore has stories from his Daily Gazette and Recorder newspaper history columns, Joyce Stah on the history of WMHT’s audio service for the blind, Katie Turner Getty on Britain’s use of prison ships in the American Revolution, Dana Cudmore on exploring caves in Schoharie and Albany counties. END_OF_DOCUMENT_TOKEN_TO_BE_REPLACED