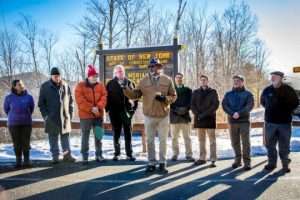 The Adirondack Council, along with several local and state elected officials and other environmental groups, called for the state to keep maintaining the former prison complex in Moriah. The state had slated to stop upkeep on the facility, which closed in 2021. While particular uses for the facility are up for debate, a wide coalition believes the facility can be used for training, housing, and other uses rather than reverting to constitutionally protected lands that would need a constitutional amendment to develop into something new. END_OF_DOCUMENT_TOKEN_TO_BE_REPLACED 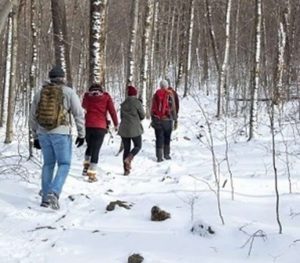 Within the 47,000-acre Blue Ridge Wilderness lies the Camp Sagamore Trail System. Located near and around the grounds of Great Camp Sagamore, a registered National Historic Landmark and one of few Adirondack Great Camps still in existence today, this trail system provides an immersive nature experience. END_OF_DOCUMENT_TOKEN_TO_BE_REPLACED 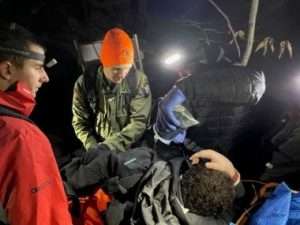 On Monday, January 2, 2023 at 2:15 p.m., NYS Department of Environmental Conservation’s dispatch office in Ray Brook, Essex County, NY, requested NYS Forest Ranger assistance with a hiker who collapsed in the snow on Johns Brook Trail. The trail, located in Keene Valley in Essex County is one of the most popular accesses to the Adirondack High Peaks. END_OF_DOCUMENT_TOKEN_TO_BE_REPLACED

He lived to a ripe old age as an elder statesman of the guiding fraternity. But confusing reports of his age, a story about guiding for royalty, and a common first and last name have obscured his actual accomplishments. END_OF_DOCUMENT_TOKEN_TO_BE_REPLACED

Echoes in These Mountains was author-historian Glenn Pearsall’s first award-winning book. Published in 2008, it tells the stories behind 55 historic sites in the Adirondack township of Johnsburg, in Warren County, NY.

The book was well received and the original run of 1,500 copies sold out years ago, so Pearsall decided it was time for a second edition. The second edition features additional historic photographs, an index and added new research and analysis, totaling 512 pages. END_OF_DOCUMENT_TOKEN_TO_BE_REPLACED

The first of three major logging operations on Big Moose Lake in Herkimer County in the Adirondacks was headed by a veteran lumber company executive named Theodore Page. Page built palatial “Camp Veery” on Echo Island in West Bay, purchased from William Seward Webb in 1900. He arrived at Big Moose Lake from Oswego, NY, with many years of leadership in the lumber industry, importing timber from Canada for the Minetto Shade Cloth Company – one of the largest U.S. manufacturers of shade cloth, window shades, shade-rollers, and curtain fixtures. END_OF_DOCUMENT_TOKEN_TO_BE_REPLACED 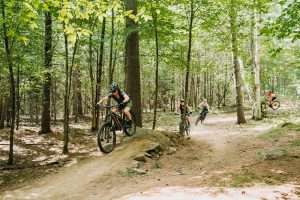 Effective January 1, 2023, the Lake Placid Land Conservancy (LPLC) will merge into the Adirondack Land Trust as approved by the New York State Attorney General’s office and the Secretary of State. The assets, programs and land stewardship responsibilities of LPLC will be transferred to the Adirondack Land Trust. END_OF_DOCUMENT_TOKEN_TO_BE_REPLACED

The spark that got me writing about Adirondack history was the personal question of how my family came into possession of a log cabin on Twitchell Lake in Big Moose, NY. Unraveling this mystery took a year’s research — searching newly discovered diaries and networking with genealogy contacts.

It turns out my connection began with a love story, which I told in the New York Almanack. That account included the accompanying photo of my grandparents’ wedding in Buffalo, NY, in 1908. This article will explore how the hamlet of Big Moose supported the growth of thriving summer communities on Twitchell and Big Moose Lakes, setting the stage for major logging operations on Big Moose Lake. Early in this era, 60 percent of Twitchell’s lakeshore was slated for major logging before going up for sale as summer lots. END_OF_DOCUMENT_TOKEN_TO_BE_REPLACED

Over the past two years, thousands of people had come to Chestertown in Northern Warren County to stand over her as she suffered. END_OF_DOCUMENT_TOKEN_TO_BE_REPLACED 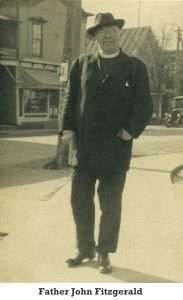 Born in England, John Gerald Fitzgerald (1850-1925) attended seminary in Troy, NY, accepting his first assignment as a priest in the Diocese of Ogdensburg. Following pastorates in upstate New York, Father Fitz – as he was affectionately called – was given the daunting challenge of establishing a parish in Old Forge, in the Adirondacks.

In 1896, Northern Herkimer County was a heavily forested region dotted by tiny hamlets, scattered lumber camps, and remote railroad stations along the Mohawk & Malone Railroad. For the next twenty-nine years, he got off the Mohawk & Malone at stations like McKeever, Carter, Big Moose, Beaver River, Brandreth, Keepewa, Nehasane, and Horseshoe Lake, carrying his bible and sacraments from these stops to remote lumber camps on snowshoes, wearing his trademark coonskin cap and woolen mittens. His parish stretched over a 200 square-mile area. END_OF_DOCUMENT_TOKEN_TO_BE_REPLACED