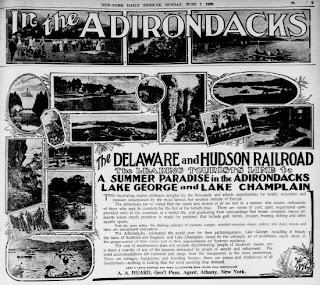 The Library of Congress has launched the beta version of a new online searchable newspaper collection, Chronicling America: Historic American Newspapers at http://chroniclingamerica.loc.gov/. The site currently contains newspapers from 1880 to 1910 (more are coming) plus a directory for newspapers published in the United States since 1690 (a look there turns up over 11,000 New York newspapers). Results from Essex County include 85 newspapers once published there.

Research Buzz has all the tips on searching, but suffice it to say that along with the Brooklyn Daily Eagle online, and Northern New York Library Network’s vast online collection of Northern New York newspapers, online New York history research just got a whole lot better. The Library of Congress site includes papers that have heretofore been unavailable for free. These include New York City / National papers The Evening World, Horace Greeley’s The New York Tribune, and the The Sun, plus other major dailies from across the nation. 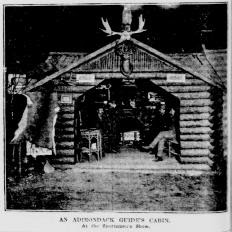 I took a look at some one of my favorite historical topics, the Adirondacks. The collection includes reports from Adirondack travelers, social notes from local resorts, and hundreds of advertisements like the one above by the Delaware & Hudson Railroad from 1908. Genealogists are going to find a lot of great stuff here, as well as political historians, and folks interested in the creation of the Adirondack Park, the 1903 and 1908 fires, and a lot more like a long report on the 1900 New York Sportsman Show, including the Adirondack Guide exhibit photo shown here.

Cedar Grove, the Thomas Cole National Historic Site is seeking volunteers to conduct on-site school programs during the 2009-2010 school year. The schedule and time commitment are very flexible although a brief training will be held June 5 and 6, 2009.

School Programs Docents impart meaningful information about the life, relationships and works of the 19th-century artist Thomas Cole through hands-on activities catered to each grade level and subject area. END_OF_DOCUMENT_TOKEN_TO_BE_REPLACED 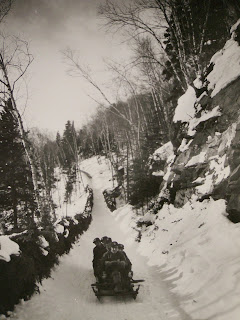 At the 1932 & 1980 Lake Placid Winter Olympic Museum Board of Directors’ April meeting, newest member Joe Clain donated $1,000 to kick-off the creation of an International Sliding Sports Museum in Lake Placid. Clain made the donation on behalf of his father Gus Clain and the Linney Family in the hopes that other prominent families in the history of sliding sports will come forward and meet the challenge.

Angus (Gus) Clain was the brakeman for the four-man sled piloted by Robert Linney, which qualified at the 1939 trials in Lake Placid for the 1940 Olympic Winter Games. Because of WWII, the Games were not contested in 1940 or 1944. The family of Gus Clain previously created and donated a very rare exhibit consisting of the sweater and jacket issued to the 1940 Olympic Bobsled team, and which is on permanent display in the Olympic Museum.

The Sliding Sports Museum at Mt. Van Hoevenberg will be an annex to the already existing Olympic Museum – located within the Olympic Center – and as such will come under the same chartering agency, the Board of Regents of the University of the State of New York on behalf of the State Education Department. The future museum will share the same 501(c) 3 not-for-profit status making all donations eligible for a tax deduction.

“The next logical step is to create an advisory board of interested community members who share the same passion for preserving, displaying and educating future generations on the rich history of sliding sports in this area,” said Olympic Museum Director Liz De Fazio in a press release issued this week.

For more information on the proposed International Sliding Museum, or to make a donation, contact De Fazio at (518) 523-1655, ext. 226 or ldefazio@orda.org. 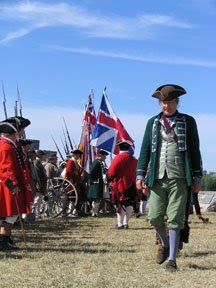 A presentation by acclaimed French & Indian War reenactor Major George A. Bray III will present “Struggle for an Empire, The French and Indian War along the Great Lakes Seaway Trail, 1755-1760” at 6 pm at the Sackets Harbor Battlefield this Thursday, May 21, 2009. Bray will relate tales of the 250-year-old conflict to open the 2009 Great Lakes Seaway Trail Experience Series. Bray will appear in period costume, portraying an officer of Rogers’ Rangers, an elite rapid response light infantry unit known for its bold military tactics. Rogers’ Rangers became the chief scouting unit of the British Crown forces during the war fought from 1754 to 1760.

In addition to being a respected French & Indian War historian, Bray is a Fellow of the Company of Military Historians, and an author writing for such publications as Early America Review. He has written about various aspects of the war from the use of poisoned bullets by the French to scalping. Bray’s historic collection includes original newspapers, documents, books, prints and weaponry.

As event commander at historic Fort Niagara in Youngstown, NY, Bray will welcome hundreds of reenactors for the July 3-5 New York State Signature Event for the 250th French & Indian War Anniversary Commemoration. Bray says, “My mission is to portray 18th century military life for the education of visitors to historic sites and to perpetuate the significant history of the French and Indian War and Rogers’ Rangers.”

Iconic quarterback Joe Namath; Nobel laureate Dr. Eric R. Kandel; comedian and producer Jerry Seinfeld; and music superstars Gloria and Emilio Estefan are this year’s distinguished honorees who will be recognized during the Ellis Island Family Heritage Awards to be held at 11 a.m. on tomorrow (Tuesday), May 19, 2009 in the Great Hall at the Ellis Island Immigration Museum. Candice Bergen, Emmy and Golden Globe-winning actress, will serve as Host.

In its eighth year, the Ellis Island Family Heritage Awards are presented by The Statue of Liberty-Ellis Island Foundation, Inc. to celebrate exemplary Ellis Island/Port of New York immigrants or their descendents who have made a major contribution to the American experience. The B.C. Forbes Peopling of America Award, sponsored by the Forbes Family, honors the lives of immigrants who arrived at another time or through another port of entry. The Foundation’s database of ship’s passenger arrivals available at the American Family Immigration History Center® and online at www.ellisisland.org documents the arrivals of 25 million immigrants, travelers and crew members who came through America’s Golden Door and the Port of New York between 1892-1924. For more information on the Awards, visit http://www.ellisisland.org/genealogy/2009_recipients_intro.asp. 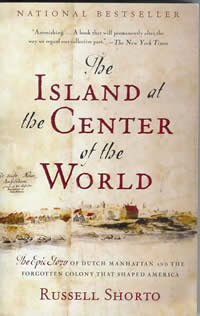 Acclaimed writer Russell Shorto will present “The Accidental Legacy of Henry Hudson” at the Museum of the City of New York (1220 Fifth Avenue at 104th Street, NYC) this Wednesday, May 20, 2009 at 6:30 PM. According to the program announcement: “Henry Hudson’s name is everywhere in New York-attached to a river, a street, a park, a bridge, and more-yet little is known about the man himself. Bestselling author and New York Times Magazine contributing writer Russell Shorto, author of the award-winning The Island at the Center of the World

Shorto most recently published a feature in The New York Times (Sunday, May 3, 2009) entitled “Going Dutch: How I Learned to Love the Welfare State.”

The program is presented in conjunction with the exhibit Amsterdam / New Amsterdam: The Worlds of Henry Hudson. Reservations are required. The cost will be $12 for non-members, $8 for seniors and students, and $6 for museum members. A $2 surcharge applies for unreserved, walk-in tickets. Tickets may be ordered online at www.mcny.org or by calling 212.534.1672, ext. 3395.