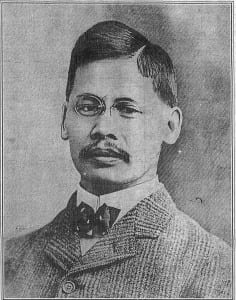 The first Western-trained Chinese physician to practice in the U.S. lived most of his life in Brooklyn, where he established America’s first modern hospital for Chinese patients. A strong civil rights advocate at a time when his community could boast few of them, he spoke out frequently and forcefully against the injustices to which Chinese in America were subjected.

China-born Joseph Chak Thoms (1862-1929), known in his native Cantonese dialect as Tom Ah Jo, arrived in California as a teenager in the mid-1870s. He had a gift for language and soon mastered English with hardly an accent. After being baptized by a Presbyterian missionary – which earned him a beating from his uncle – he took a job as a cabin boy and sailed around the world on a steamer, visiting Japan and India before returning to America. END_OF_DOCUMENT_TOKEN_TO_BE_REPLACED