Suzanne Clary is President of the Jay Heritage Center (JHC), the non-profit stewards of the historic 23-acre Jay Estate in Rye, NY. The National Historic Landmark site was the home of Founding Father, John Jay (1745-1829), jurist, peacemaker, anti-slavery advocate and Governor of New York. It was also the home of women and men, enslaved and freed like Caesar Valentine, Mary, Peet and Sylvia. As members of Westchester County's African American Heritage Trail, JHC is committed to researching and interpreting the lives of all the residents who lived and worked at the Jay Estate.

But all these indelible lyrics underscored why we will never be satisfied. Despite the brilliance of the script and cast, in dramatizing the life and times of Alexander Hamilton, Miranda left us longing for narratives beyond those of the Founding Fathers and their rarefied circle. Now we want to know what will come next to fill the ever more obvious omissions in our nation’s history. END_OF_DOCUMENT_TOKEN_TO_BE_REPLACED 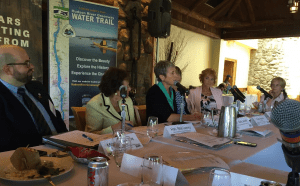 How can we be more inclusive and engage future generations to be passionate advocates of historic sites and parks? That was the question at a recent gathering of national and state preservationists at Bear Mountain State Park in late August.

The National Park Service (NPS) is celebrating its centennial this year. With record breaking visitation, it is also mindful that more must be done to inspire new audiences and stewards in the next 100 years. As part of that planning, U. S. Secretary of the Interior Sally Jewell started off on a nationwide tour of NPS sites beginning with a historic first time visit to New York’s Hudson Valley. END_OF_DOCUMENT_TOKEN_TO_BE_REPLACED 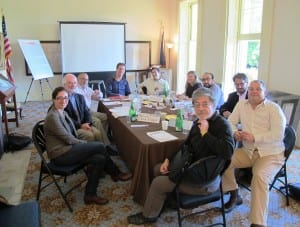 This past September 18 – 20, in launching the first of what it hopes to be many academic conferences at its site, the Jay Heritage Center (JHC) faced a welcome challenge: to select a topic, a keynote speaker, and partner institutions sure to generate vigorous, enlightened and thought provoking discussions.

As a member site of NY’s Path Through History for its themes on Civil Rights and suitably inspired by our nation’s observation of Constitution Week each fall, JHC asked acclaimed scholar, author and Yale Law School Professor, Akhil Reed Amar to speak “On the Nature of Constitutions.” END_OF_DOCUMENT_TOKEN_TO_BE_REPLACED