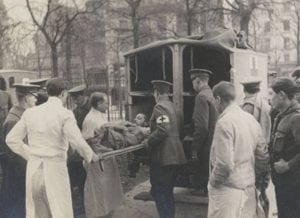 This past year marked the 100th anniversary of America’s entrance into World War I, on April 6, 1917. What was hoped to be the “war to end all wars” turned out to be nothing of the sort, and stands instead as one of the great disasters of the 20th century, remembered mostly for the senseless and utter wasting of millions of young lives and the high idealism of those so wasted.

Prominent families in the Hudson Valley were not spared. Before the days of college deferments, smoking but not inhaling, and that sanctuary known as the Texas Air National Guard, the sons and daughters of elite families didn’t just talk the talk but actually walked the walk of service to higher ideals by responding to the twin calls of patriotism and the fight against tyranny. Sons drove ambulances, fought with the French, and, when the time came, enlisted in our own armed forces. Daughters went to France to act as nurses or work in relief organizations. Being away from the fighting, the daughters returned. But not all the sons. END_OF_DOCUMENT_TOKEN_TO_BE_REPLACED

On New York State Route 94, just north of the village of Chester, Orange County,  cars and their occupants whiz past the homestead site of a once-famous pioneer and author, the site of a once locally renowned public house, and a resting place for local residents probably known only to loved ones.

The first two sites have only their historical markers to indicate what once was there, while the last has, I suppose one could say, historical markers of a sort, but also continued presence that evokes an image of past community and that gives poignant testimony to the way we have layered our world on top of it. END_OF_DOCUMENT_TOKEN_TO_BE_REPLACED