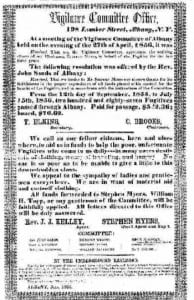 Such a committee formed in Albany in the early 1840s, and one continued to exist up to the time of the Civil War. Albany’s anti-slavery newspaper, Tocsin of Liberty, identifies ten people, Blacks and whites, as members of the executive body of the local Vigilance Committee in 1842. Some are familiar names from the city’s history, such as Thomas Paul and Revolutionary War veteran Benjamin Lattimore. END_OF_DOCUMENT_TOKEN_TO_BE_REPLACED 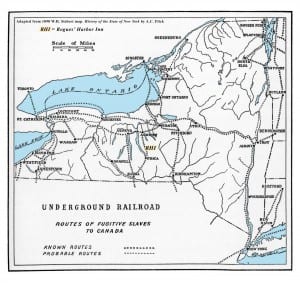 Commerce along the Hudson and Erie Canal system, and new forms of transportation such as the steamboat and the railroad, greatly increased the opportunities for people, including fugitives from slavery, to travel from port to port, and city to city. The new transportation systems, as well as burgeoning social movements of the antebellum period, such as Sunday School, temperance and women’s rights movements, provided abundant opportunities for the sort of networking that facilitated Underground Railroad efforts. END_OF_DOCUMENT_TOKEN_TO_BE_REPLACED