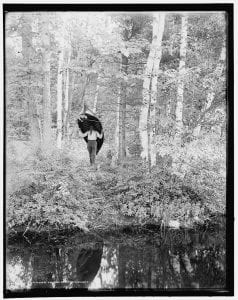 One of the greatest landscape photographers during the latter half of the Nineteenth Century was William Henry Jackson (April 4, 1843 – June 30, 1942). A native son of the Adirondacks Jackson was born in Keeseville, New York to George Jackson and Harriet Allen. Harriet was a talented water-colorist and William inherited her artistic flair. His first job as an artist in 1858 was a re-toucher for a photography studio in Troy New York.

In 1866 after serving in the Civil War, Jackson boarded a Union Pacific train to the end of the line in Omaha, Nebraska. There he entered the photography business. The Union Pacific gave him a commission in 1869 to document the scenery along their routes for promotional purposes. It was this work that was discovered by Ferdinand Hayden who invited Jackson on the 1870 U.S. government survey (predecessor of the U.S. Geologic Survey) of the Yellowstone River and Rocky Mountains. He was also on the 1871 Hayden Geologic Survey which led to the creation of Yellowstone as America’s first National Park. It was Jackson’s images that played an important role in convincing Congress to establish the Park in 1872. END_OF_DOCUMENT_TOKEN_TO_BE_REPLACED