Since it opened to traffic on April 11, 1960, millions of vehicles traveling the I-87 Northway have passed over the Mohawk River on what they think are called on “The Twin Bridges.” That bridge however, is really named for a Polish-American hero of the American Revolution – Taddeus Kosciusko. 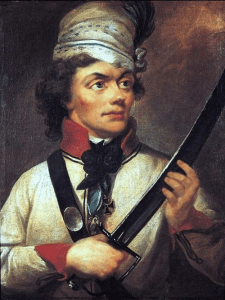 Andrzej Tadeusz Bonawentura Kościuszko (Taddeus Kosciusko is the Anglicized version) was born to minor Polish nobility on February 4, 1746 and educated at the School for Knights in Warsaw. There, he studied not only military science but also history, philosophy, Latin, French, German, geography, and engineering. He completed his studies in France attending lectures at the Academy of Fine Arts and at military schools.

Because Poland was dominated by its larger neighbors Prussia and Russia, ambitious young men such as Kosciusko found opportunities lacking and immigrated to America in 1776. His military skills were sorely needed in the Continental Army which was composed mostly of farmers and he was immediately given a commission as a Colonel of Engineers and later promoted to head engineer of the Army.

He was soon attached to the Northern Army in response to British General John Burgoyne’s impending invasion from Canada. Assigned to assess the defenses of Fort Ticonderoga, he recommended that a battery of artillery be placed on Mount Independence, which overlooked the Fort. The commander ignored this advice and the British captured the Fort on July 6th, 1777 after placing their own artillery on Mount Defiance.

As the Patriots retreated south from the Fort, Kosciusko destroyed bridges, felled trees and dammed streams to help provide time to regroup and select a good defensive position from which to meet the British invasion. That place was around Saratoga (old Saratoga, now known as Schuylerville). 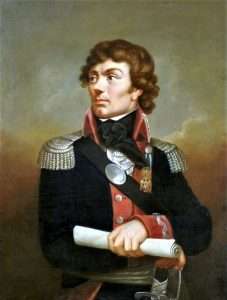 Kosciusko’s array of defensive positions, particularly on Bemis Heights overlooking the Hudson River, frustrated the British Army when they attached on September 19 and again on October 7, 1777. When Burgoyne realized he could not proceed and was unable to return to Canada due to the approaching winter, he surrendered.

General Horatio Gates, the Commander at Saratoga, later wrote that “the great tacticians of the campaign were the hills and forests which a young Polish engineer was skillful enough to select for my encampment.”  If the Battles of Saratoga was the turning point of the American Revolution, then Taddeus Kosciusko was at the hub of the turn.

Other sites where Kosciusko applied his talents were at Peebles Island at the confluence of the Mohawk and the Hudson in Waterford and at West Point. His earthworks at Bemis Heights and Peebles Island can still be seen today while his plans for defending West Point were those that Benedict Arnold tried to sell to the British. After Saratoga, he transferred to the Southern Department as Chief Engineer and participated in most of the important battles in that area until Cornwallis’s surrender after the Battle of Yorktown in 1781.

At the conclusion of the war, a grateful Continental Congress promoted him to Brigadier General, granted American citizenship and gave him a land grant. He was also admitted to the prestigious Society of the Cincinnati and the American Philosophical Society. 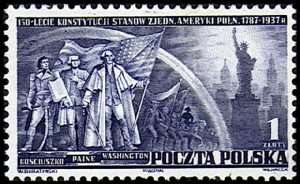 In Poland, Kosciusko led opposition to Russian interference in the internal affairs of Poland. When war broke out with Russia (referred to as Kosciusko’s Uprising), he won many battles but eventually was wounded and captured. Released in 1796, he traveled throughout Europe until his death in 1817.

The poet Byron said that “Kosciusko was that sound that crashes in a tyrant’s ear” and Jefferson pronounced him “as pure a son of liberty as I have ever known.”

Next time you cross his bridge, shout out a hardy dziekuje! (Thank You!)

Paul Perreault has been the Malta Town Historian since 2009. He served as principal in the Ballston Spa School District from 1978 until 1998 and as a history teacher at Shenendehowa High School from 1967 until 1975. He is the editor of the Gristmill, published quarterly by the Saratoga County History Center.

Illustrations from above: The “Twin Bridges” (officially “Taddeus Kosciusko Bidge” over the Mohawk River on Interstate 87 in Saratoga County; a portrait of Tadeusz Kościuszko wearing the Eagle of the Society of the Cincinnati, awarded him by George Washington (portrait by Karl Gottlieb Schweikart); Portrait of Kościuszko as a member of the Warsaw Cadet Corps by Kazimierz Wojniakowski; and a Polish postage stamp from 1938 showing Kościuszko with saber (left), Thomas Paine and George Washington.