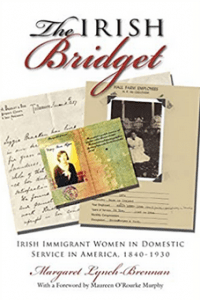 Irish servant girls appeared in popular literature often stereotypically called “Bridget” or “Biddy.”  These names became so closely linked to domestic service in America that some Irish immigrants changed their name in an effort to escape the negative connotations.

So as familiarity with the Irish domestics who worked in their homes may have slowly eroded long-held prejudices on the part of middle-class Americans, the Irish Bridgets learned and adopted middle-class values as a consequence of their employment.

To celebrate St. Brigid’s Day, Dr. Margaret Lynch-Brennan will discuss her popular study of Irish immigrant girls who worked as maids in the United States in a talk entitled “The Irish Bridget” to be held virtually and at the Irish American Heritage Museum on Monday, January 30th.

Dr. Margaret Lynch-Brennan began her career as a classroom teacher. For many years she served as an administrator with the New York State Education Department working on issues related to civil rights, high school reform, and professional development for teachers.

After earning a Ph.D. in American History from the University at Albany, SUNY, she published essays in three books and presented at conferences in Australia, Germany, Ireland and the United States. Her book, The Irish Bridget: Irish Immigrant Women in Domestic Service in America, 1840-1930 (2009, Syracuse Univ. Press).

This program will begin at 7 pm and will be held live at the Museum, virtually via Zoom, and live on YouTube. To register for the Zoom program, click here. The Irish American Heritage Museum is located at 21 Quackenbush Square, in Albany.