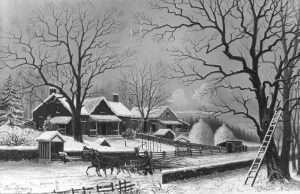 During the 1970s, staff at Preservation Long Island launched the first major effort to document all the known Long Island works by the artist Edward Lange who depicted local communities with precise detail during the 1870s and 80s.

“Edward Lange Revisited,” a gallery exhibition guest-curated in 1990 by Alison Cornish, presented an additional twenty-eight artworks that had been discovered since Failey’s and Studenroth’s original publication.

In 2013, historian Drew W. Crooks authored a book titled Edward Lange: An Early Artist of Olympia and Washington State outlining the latter portion of the artist’s life after he moved away from Long Island. Collectively, these scholars developed the foundation for all that we had known about Lange.

The Art of Edward Lange Project is Preservation Long Island’s most involved effort relating to the artist to date, conceived by curator Lauren Brincat in 2019 with the goal of tracking down Lange’s Long Island views to create an updated catalogue of his art. The final product was developed by curatorial fellow Peter Fedoryk and launched in April of 2022.

Unfortunately, the whereabouts of many of the privately-owned works Preservation Long Island documented in the 1970s, including the winter scene above, are unknown. They continue to search for these artworks to better understand and share the stories they tell.

If you have information about Lange’s work tyhat is not already included in Preservation Long Island’s database here, contact them at info@preservationlongisland.org.